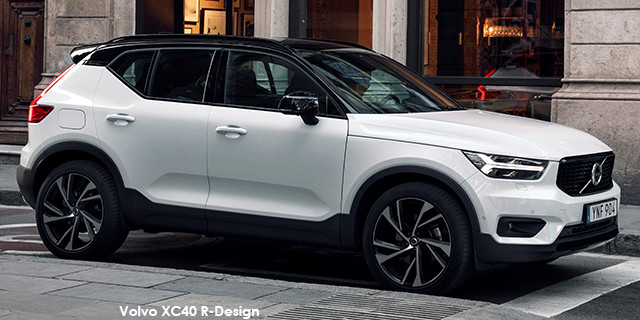 After having spent a week in the all-new 2020 Volvo XC90, we were rather excited to spend some time with Volvo’s newest family member, the Volvo XC40. It competes in the newly emerging ‘compact SUV’ segment of the market, currently featuring rivals such as the Jaguar E-Pace and the BMW X2. Let’s see what the XC40 is like.

The design of the entire Volvo XC40 range is clean and simple. The R Design model takes it up a level by adding a bit of a sporty flair to the compact SUV, such as custom badging, a gloss black grille and other gloss black bits around the car. The bold styling gives the compact SUV a very confident stance without making the car appear visually larger. The SUV rides on a set of standard 19-inch wheels, although there is a set of bigger 20-inch wheels somewhere on the options list.

The interior is where the XC40 starts gaining the lead on its rivals. You can really feel that Volvo designed the cabin with functionality at the top of their priority list. The doors, for example, make use of some clever design to relocate the speakers to the top, freeing up a lot of space at the bottom of the door which has been repurposed for storage. It also makes the cabin feel a lot more spacious, which one wouldn’t really expect from the XC40 at first glance. In fact, I was very surprised when I first saw the vehicle. I expected a smaller cabin with a slightly cramped rear cabin. Instead, the XC40 proved to be spacious enough for me to fit behind my driver seat, which had been adjusted to accommodate my height.

The boot was also rather practical. Its flat and ergonomic enough to get the most out of the 460-litres of capacity at the back. Closing the boot is also easy, thanks to the optional R Design pack that includes an electric boot, as well as heated seats, park assist and a reverse camera. The 9-inch tablet on the dashboard that controls the infotainment is effortless to use, aside from the fact that it does take some getting used to. The tablet is standard across the range and features navigation, Bluetooth, two USB port, wireless charging and smartphone connectivity through Apple CarPlay and Android Auto.

The cabin wasn’t the only surprise on the Volvo XC40. The T5 model is equipped with a turbocharged 2.0-litre 4-cylinder engine that produces 185kW of power and 350Nm of torque. That’s about enough power to make a Volkswagen Golf GTI scared. That power is sent through an 8-speed automatic gearbox and is sent to all-four wheels. Push the XC40 to its limits and it will accelerate from 0-100km/h in 6.4-seconds before climbing up to its top speed of 230km/h.

Driving the Volvo XC40 is somewhat of an exciting experience. It doesn’t perform like a track-focused hot hatch, but it doesn’t perform like a boring, family SUV either. The only issue I had with the XC40 is the steering weight. It feels very light and responds to any minor steering input. The result is a car that feels a bit jumpy in its tracks. I thought this would have been improved through the use of the Dynamic mode drive select but it didn’t. The Eco mode didn’t work too well either, with our test unit struggling to achieve anything below 9.0-litres/100km – far from the claimed consumption of 7.7-litres/100km. But this was something I could overlook in exchange for the 185kW of power. Overall, the Volvo XC40 is a practical car, but practical cars don’t do much to stir the passion and excitement levels of drivers and passengers. That’s why the T5 R Design model makes sense. It blends practically with excitement, and makes for a good all-rounder that’s ready for anything.