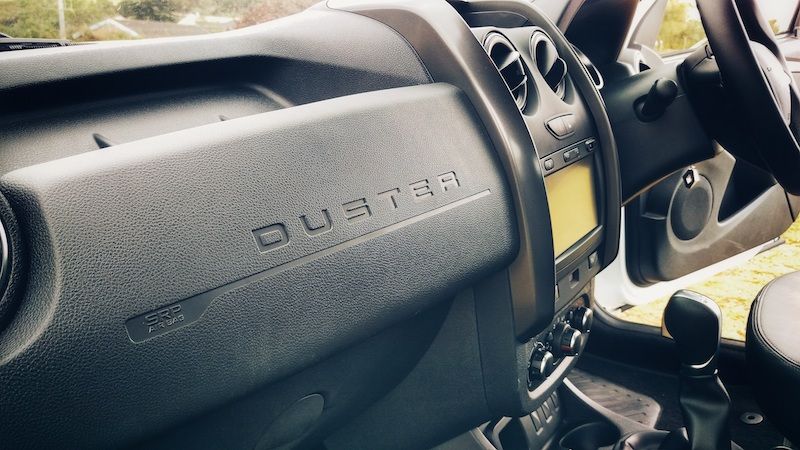 The Renault Duster is one of the most keenly priced cars on the market and sales in South Africa have soared since its launch in 2013, with more than 12 000 units sold. With an entry price that's sub-R240 000, it’s easy to have low expectations for the Renault Duster, but it's a pleasant surprise. Even in the more expensive Dynamique trim level it is a good buy on merit of its size and practicality.

The Renault Duster seats five comfortably, and in standard guise, combined with its ground clearance can manage some soft-roading. Go for the 4WD range-topper, and you can enjoy some surprisingly good capability off road. That said, most buyers are likely to go for the front-wheel drive variant, but now that Renault finally offers an automatic, that is likely to pick up its fair share of fans, notably because it’s not just an old torque-converter style box, it’s actually a proper EDC dual-clutch transmission.

The muscular exterior design of the Duster underlines its go-anywhere nature. The front end sports a redesigned grill, adorned by two chrome-plated strips and housing a new, lower-set air intake and new double-optic headlights with daytime running lights. At the back, new lights echo the styling cues of the front end, notably through the use of chrome. While Duster-labeled roof bars with slatted supports serve to underline the car’s SUV character.

The engine choice is pretty simple for the Duster range. There’s only two models available in South Africa, a 1.6-litre naturally-aspirated petrol unit that produces 77kw and 148nm, and the 1.5dCi turbo-diesel variant that cranks out a decent 80kw and 240nm (250nm when mated to the EDC). The Duster shares its architecture with the Renault Captur and Clio, and the Nissan Juke and new Micra, meaning that it’s proven to be solid. The EDC transmission though, is apparently the same unit you can find in the Megane and the Kadjar.

Our 1.5dCi-engined Duster proved punchy with plenty of in-gear shove but was a little gruff and noisy when revved. In urban environments, the engine-gearbox combination performs extremely well. Shifts are smooth and immediate – when using the self-shifting manual mode. Renault’s engineers no doubt calibrated this gearbox rather well to match the Duster’s torquey motor. Post 2,000rpm, the Duster EDC surges forward, and if left in the manual mode, will willingly hit its 5,500rpm limiter. In our fuel economy tests we managed a best of 6.4L/100kms – not far off Renault’s claim of 5.8L/100kms.

Thanks to its raised driving position, visibility is great, but whilst the seats are nice and wide they don’t offer much in the way of support. Long-travel suspension and a soft set-up mean the Duster absorbs small bumps with greater composure. It isn’t meant to be pushed hard in corners; hence the body-roll in bends. But keep the Duster at a slower pace, and the ride is composed and comfortable.

The Duster in the Dynamique trim actually comes with decent levels of kit as standard. This includes roof bars, electric windows, Bluetooth, AUX and USB connections, cruise control, steering mounted controls for the audio system, stylish 16” black alloy wheels, reverse parking sensors and touchscreen navigation. Admittedly the switchgear is pinched from various Renaults, but the cabin is a familiar and comfy place. One area of contention though, was the amount of noise that filtered its way into the cabin, likely due to not enough of sound deadening.

While the utilitarian cabin is filled with a lot of hard scratchy plastics, these are surprisingly durable – especially if you have kids or dogs. This makes cleaning a breeze. There are some glossy piano-black trim on the centre drop-down console, and combined with the leather, does give it a bit more of a premium feel. The nicest addition to the Duster’s interior is the updated Media NAV system, although its positioning is a little questionable. While there has been a lot of criticism levelled at the Duster because of cheaper interior trimmings, it’s important to note that is what allows Renault to offer it at a competitive price.

The cabin though, is spacious and three adults can comfortably be seated on the rear bench seat. There’s also tons of stowage space throughout the car, which will make travelling a breeze. Thanks to the spare wheel being clearly located under the rear of the car, this frees up a fair amount of space in the luggage bay. With the rear seats up, the Duster is claimed to hold up to 475 litres of cargo, and with the seats folded down, it will swallow up to 1636 litres of luggage – significantly more than pricier crossovers.

The previous Duster was built in India; however Renault SA has decided to source the latest models from Romania meaning that local Duster (and Sandero) models come from the Pitesti factory. This means that Renault can bring the Duster in at a similar price to the old model while increasing the standard specification. Because of that, Renault SA has managed to price the Duster range from a very affordable R239 900, to R309 900 for the flagship 4WD model. The 1.5dCi EDC comes in at R299 900.

Renault’s Duster is by quite some margin one of the cheapest ways into SUV ownership in South Africa – but it does come at a price. Overall quality is not exactly premium, and unless you’re optioning for the Dynamique spec, you’re getting something relatively bare bones. But if luxury isn’t your priority and you’re looking for a comfortable and spacious SUV with off-road capability, then it’s difficult to go wrong with Renault’s Duster.