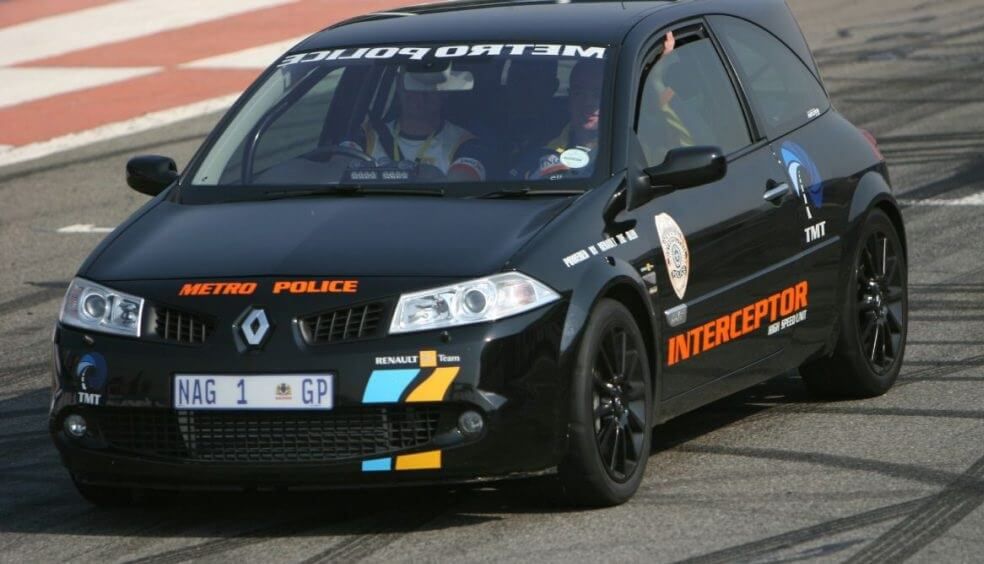 There was an urban legend that surfaced just over 10 years ago about a black hatchback that would prowl the highways around Johannesburg – tracking down speedsters. And while many would speak of it almost as if it was the Loch Ness Monster, if you did happen to be on the receiving end of its wrath, you were no doubt rendered speechless – and in deep kak.

This was the Interceptor. It headed-up an elite special task force called N.A.G1 set up by Arrive Alive and the JMPD to take back the streets from speedsters. Their mission: “Fight crime, and do it as fast as possible!” The exclusive blacked-out crime fighter’s only giveaway were its tiny JMPD decals and dash-mounted police lights.

The Interceptor was based on the Renault Megane RS225 “R25” F1 Team, which was procured from Renault The Glen. While the F1-inspired Megane R25 was an already quick car in standard trim, it also brought fantastic agility – and reliability – something that was essential for a high speed pursuit vehicle.

Prior to being put into service, the 165kw 2.0-litre turbocharged Megane F1 received a R160 000 upgrade (in 2007!) – Courtesy of T.M.T. The conversion included everything from a massive Garrett 45-series turbocharger, a custom carbon-fibre intake, water-methanol injection, bigger and forged pistons, an oil surge tank, a new dump valve, a larger intercooler, an 86mm exhaust system, a ceramic coat turbo manifold, polished piping and braided hoses, and a copper button clutch. The motor was then balanced and blueprinted in true race spec, and tuned with a Dictator Fuel management system – whilst running only 116 octane fuel.

The 6-speed manual transmission was also fettled, whilst the battery was relocated to the trunk to further improve weight distribution. Even the standard 4-piston Brembo brakes were upgraded to 6-piston carbon ceramic stoppers. T.M.T. deemed the Megane RS’ standard sport suspension more than capable, so it was not altered.

Its final power figures? A staggering 343kw and 676nm of torque – at the wheels – at altitude! If ever the Interceptor was on your tail, best you try not to outrun it – as it was capable of running with a turbocharged Kawasaki ZX14 superbike from the dig, til 310kph. Fair to say – it was a supercar eater.

Only three highly skilled drivers: Marius Harmse, (then Sales Manager at Renault The Glen), Chris Olivier, (OM at Traffic Management Technologies), and JMPD Sgt Johan Du Toit, were authorized to drive the stealthy hyper-hatch. During its time on the streets – the N.A.G.1 initiative was an incredible success, bagging over 12000+ arrests since its inception in 2006.

Strangely, the elite unit was canned in 2007, just over a year later. The car was actually showcased at the Castrol Auto Extreme show a decade ago, but few would remember its surprise appearance there. Sadly no-one knows what happened to the Interceptor, but to those in the know, it will remain the ultimate high-speed crime fighting machine. Perhaps JMPD needs a sequel?