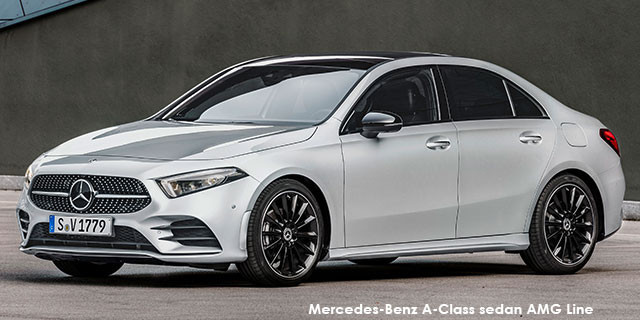 In a global market where the bigger players such as China and the United States dictate the type of vehicles that manufacturers develop and produce due to their sheer economic power and demand for cars, it's no surprise that there's a now a sedan version of the A-Class.

Regarding China, its appetite for sedans, and more bizarrely, sedans with an extended wheelbase is well documented, making the A-Class sedan the right type of vehicle for Mercedes when looking to conquer the compact premium segment.

Why bring it here?

From a local perspective, Mercedes-Benz says that this car has been introduced to cater for those buying down from say, a C-Class for example, offering a more attainable small sedan much as Audi did years ago with the A3 Sedan.

In terms of styling, it's identical to an A-Class hatchback, featuring the same front-end styling and a similar aesthetic from the C-pillar frontward. The rear-end, in typical sedan fashion squares off and features LED rear lights to complete what we feel is a wonderful small sedan design.

There's the proverbial elephant in the room though, as Mercedes-Benz also has the CLA on offer, a car so similar to the A-Class sedan bar its more raked roofline and more rounded rear-end. Having sampled the CLA, we have to admit that the sedan provides more practical package, however, the more style-conscious may opt for the CLA.

Our biggest gripe with small Mercedes-Benz models in the past has been the prevalence of cheap interior materials and shoddy build quality. While there are certain areas in which cheaper plastics are prevalent, the new generation models are far better than before in terms of fit and finish. In terms of practicality, the rear passenger space is limited while the boot offers 420-litres of volume, some 40-litres less than in the CLA, but still able to accommodate three sets of golf clubs.

Much as with the hatchback version, there's ambient lighting and two infotainment options, dual 7.0-inch displays or two 10.25 inch screens. Our press unit features the latter MBUX infotainment system, which gives you the impression that you're in one of the larger Mercedes-Benz models. The fully digitised rectangular instrument and infotainment set-up are currently the best within this segment.

The A200 sedan test car features a seven-speed dual-clutch gearbox paired with the brand's new 1.3-litre turbo petrol engine with 120kW and 250 N.m. The three-cylinder unit was co-developed with Renault and provides respectable performance, although, there is a noticeable amount of turbo lag in the lower echelons of the rev range

The biggest criticism that I had of the previous generation A-Class, especially the earlier models, was its incredibly harsh ride quality. The new model rides on a new MFA2 platform, making the car bigger while new suspension tuning has resulted in a more compliant ride. Our A200 test car has retained the torsion beam rear suspension, with the four-link setup saved for the A250 model; however, it still exhibited a respectable ride quality.

As a small, premium sedan, the A-Class is an impressive product, however, as with all products that appeal to the premium market, there is a premium price attached while the optional extras list can inflate said price even more. We would rather go for a lower-spec C-Class than splurge on a highly-specified A-Class Sedan.