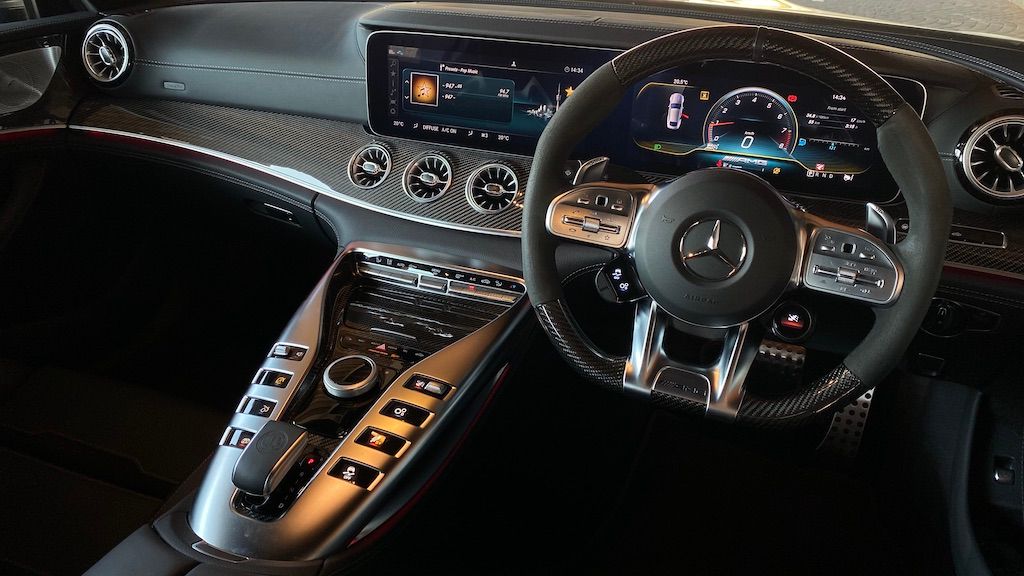 The AutoAdvisor team recently spent a week with the monstrous Mercedes-AMG GT63 S 4Matic+, the third car to be solely developed by the team in Affalterbach after the SLS and two-door GT models. With rumours that this will be the only generation of the AMG GT four-door, and with a more potent GT 73 EQ Power+ variant on the way, we savoured our time with this brute.

The four-door GT will be a confusing car for some, seemingly blending the ethos of the two-door rear-wheel drive GT with the more traditional E63 S. The latter is lighter, but less powerful and essentially provides the same sort of experience for R1-million less and is built on a similar platform. However, it is the infusion of the former that makes the GT 4-Door something to behold, it commands attention that few other vehicles can muster, regardless of the price point.

In basic terms, it’s a four-door hatchback that casts the silhouette of a large coupe, a true V8 2+2 saloon. By 2+2 we mean four seats, you see, in place of a rear bench are two individual seats, with a console separating them which includes two USB ports and a wireless charger.

The GT is also a lot more than an E-Class in a tailored AMG suit, it has been properly fettled with by AMG. Highlights include improved handling, better braking and more bespoke feel to its build and finishes. You do pay for this, with the press unit coming in at close to R3.5-million. This GT isn’t alone in offering a bespoke performance saloon packager, there’s the Porsche Panamera Turbo S e-Hybrid as well as the BMW M8 Competition Gran Coupe.

Cruising along in a massive matte grey vessel that sounds like a fighter plane garners some attention, as you might imagine, but before we get into the performance, we’d like to emphasis just how quiet and refined the GT 4-Door feels when you’re not in the mood to decimate some 95 Octane.

From our experience though, it doesn’t feel quite as potent as the E63 S, which could be a result of the GT’s 200kg weight gain. There’s still plenty of poke though, with 470kW/900Nm to make use of, which, with a four-wheel-drive system allows for ballistic acceleration. The 4Matic+ system is impressive, with variable torque and power split between the front and rear, making the 2.3-ton AMG rather light on its 22-inch feet.

The figures result in a 0-100km/h sprint of 3.2 seconds and the top speed of 315km/h in a car that feels exceptionally civilised and dignified. The nine-speed automatic gearbox suits the package perfectly, it isn’t a dual-clutch system nor does it use a torque converter, but rather a single clutch, bathed in oil which has a double de-clutching system, very clever. The GT is truly a wonderful large performance car package for those with the means to afford its exorbitant price tag.

In an era of downsizing, electrification and a generally gloomy outlook on internal combustion engines and performance cars, the GT is a wonderful reprieve from it all, showing us that there’s still life left in the V8-powered AMG.