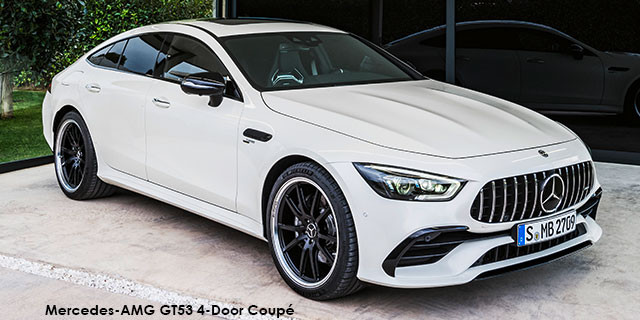 We recently spent a week with the sumptuous Mercedes-AMG GT53 4Matic+, the third car to be solely developed by the team in Affalterbach after the SLS and two-door GT models. The 53 badge signifies that fact that the vehicle is fitted with the German brand's new straight-six turbo 3.0-litre motor, but does it have what it takes in the performance four-door saloon/ coupe segment.

The GT 53 is the most affordable car within the AMG GT stable at just under R2-million before options. The GT, regardless of which model you're looking at, is something to behold. As a 2+2 saloon car with a coupe-esque silhouette, it genuinely looks like nothing else on the road. By 2+2 we mean four seats, you see, in place of a rear bench are two individual seats, with a console separating them which includes two USB ports and a wireless charger.

Despite sharing its underpinnings with the E-Class, the GT has received a proper overhaul by AMG, with sharper handling thanks to an AMG-tuned suspension, better braking and a general improvement in its fit and finish. It needs to offer an uber-premium performance saloon package with rivals such as the Porsche Panamera 4S as well as the BMW M850i Gran Coupe.

The engine dominates the driving experience of the GT53, with 336 kW and 520 N.m available from the turbocharged straight-six which is boosted by a 48-volt electrical system. The 4Matic+ four-wheel drive system along with a nine-speed automatic gearbox help put the power down seamlessly. Performance is adequate with a 0-100km/h sprint time of 4.5 seconds and on to a top speed of 285km/h.

These are impressive numbers considering its 2 045kg kerb weight and the sheer size of the car. The biggest surprise from the 53 though comes from the sound that it produces. The straight-six emits a wonderful howl while the pops and bangs during the overrun provide a new, but strangely satisfying AMG aural experience.

Since the GT is, as its name suggests, is a Grand Tourer, it needs to offer open-road cruising credentials. This where the 53 comes into its own, with the silky smooth powertrain and smaller and more forgiving tyres versus its V8 sibling. It makes longer journeys, with the odd blast an absolute treat for both the driver and the passengers.

The GT four-door is a rather incredible piece of kit and one that may prove a one-hit-wonder, as AMG isn't planning a second generation, which is sad, but understandable, given the current economic climate. In an era of downsizing, electrification and a generally gloomy outlook on internal combustion engines, the six-cylinder from AMG gives us hope that characterful smaller engines can still deliver a wonderful driving experience.