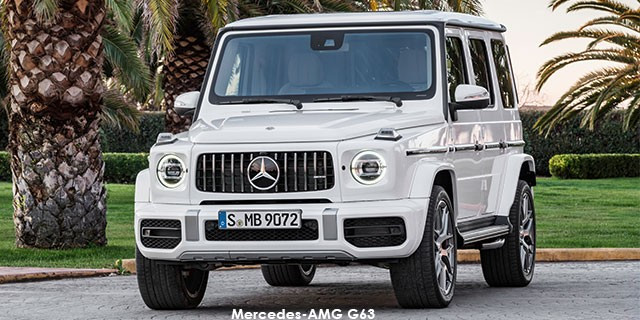 The Mercedes G-Class has become one of the most iconic vehicles in the world. It started its life 40 years ago as a utility driven SUV that could drive up and down mountains and across oceans. Today, its more synonymous with wealth, residing in garages next to Ferrari’s and Lamborghini’s. We got to spend a week with the Mercedes-AMG G63 Edition 1 and it didn’t really go the way we expected.

The design of the G63 is perfectly balanced between the nostalgic boxiness of the first generation and the modern sportiness of today’s AMG models. It may look similar to the previous generation model to the untrained eye, but an easy way to figure out whether it’s the new G-Wagon is to look at the headlights, which now feature a clean LED design. Another new design element up front is the Panamericana grille, which is borrowed from other AMG models like the AMG-GTR and the new Mercedes-AMG C63s. The bonnet protrudes between two light enclosures, leading up to the straight windscreen.

The wide arches are easily identifiable from the side view, along with the massive 22-inch alloys that fill the wheel gap. There are also two pairs of extra loud exhaust tips that peep from under the side-step below the rear doors. Just like up front, the tail lights are now also LED powered, sitting on either side of the classic spare wheel cover on the side-hinged tail gate. The model that we got to test was the Edition 1 which was available at a more premium price at the launch of the new G-Class earlier this year. It adds a set of stripes along the door, red calipers, red details on the side mirrors and alloys and a number of exclusive ‘Edition 1’ badging around the car that really complement the Designo matte grey paint.

Unlike the exterior that borrows a lot from the previous G-Class, the interior of the Mercedes-AMG G63 Edition 1 is fully modernised. You’re treated to exquisitely coloured and stitched seats that look so beautiful that you end up feeling bad for sitting on them. The traditional instrument cluster is replaced in favour of Mercedes’ new widescreen display that extends from the instrument cluster all the way into the centre of the dashboard. The screen is split into a digital instrument cluster and an infotainment system that allows the driver to navigate media, car settings, climate control and other features using the dial and touch pad located in the centre console. One of my favourite features on any AMG model is the IWC clock that is integrated into the dashboard, but the G63 had another feature that became my new favourite – red carbon fibre. The Edition 1 fills the cabin with red carbon fibre, which is like regular carbon fibre but with red weaving inside it.

Under the bonnet is a petrol 4.0-litre petrol twin turbocharged petrol V8. Don’t forget the part that it’s a petrol engine because the G63 loves petrol. In fact I struggled to keep the consumption anywhere below the 20-litres/100km mark, but I didn’t care. Saving petrol is the last thing on your mind when there’s 430kW of power and 850Nm of torque at the bottom of the accelerator pedal. All of that power is sent through Mercedes’ snappy 9-speed geartronic transmission sent to each wheel via permanent 4MATIC all-wheel drive. Plant the right pedal down all the way and the G63 will accelerate from 0-100km/h in 4.5-seconds before reaching its top speed of 220km/h. This quick acceleration becomes very addictive and it doesn’t get any less addictive with the screaming of the V8 engine being amplified from the exhausts.

The Mercedes-AMG G63 Edition 1 is loud, expensive, boxy, obnoxious, thirsty, impractical and big. Would I buy one? Absolutely. The R3-million+ price tag may be a bit steep, but for the amount of character and personality that the G63 has, above the power and all the people that stare at you as you drive it, the price tag becomes very easy to justify.

Buy a new or used Mercedes-AMG G-Class at a great price.
We put you back in control, make a single request and get up to 3 quotes from dealers nationally.
Coming soon