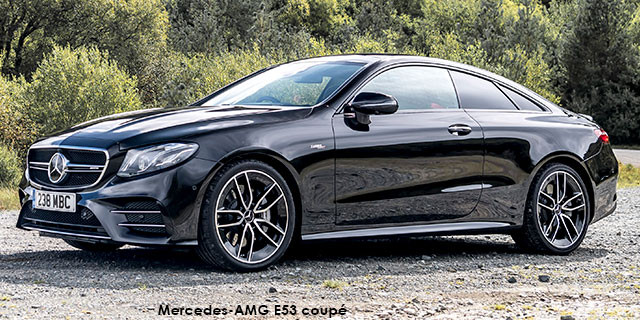 The E53 will remain the hottest E-Class AMG Coupe, after AMG rules out an E63 Coupe

Mercedes-AMG further blurs the line between their ‘53’ range and their full-fat ‘63’ line-up, with the unveiling of the 2021 Mercedes-AMG E53 Coupe 4Matic+.

The ‘53’ models now look even closer to their ‘63’ stablemates, but as before, the biggest difference lies underneath its muscular hood. Whereas the E63 (and other ‘63’ models) use a twin-turbocharged 4.0-litre V8, the E53 uses an electrified twin-turbo 3.0-litre inline-six. Naturally, there is a colossal difference in output, as the E63 in “S” guise makes 450kw and 850nm, whilst the E53 ‘only’ produces up to 336kw and 770nm. In both derivatives, power routes through an AMG Speedshift TCT 9G-transmission and travels to each wheel via the 4Matic all-wheel-drive system.

We say “produces up to”, because as mentioned before, the E53 does feature a trick powertrain. With the twin-turbocharged 3.0-litre inline-six produces 320kw and 520nm, an EQ Boost system briefly adding 16kw and 250nm.

The EQ Boost starter-alternator combines a starter motor and alternator in a powerful electric motor and is fitted between the engine and transmission. It is a key component of the 48 V on-board electrical system and not only serves as an alternator but is also responsible for hybrid functions, including recuperation, shifting of the load point, gliding mode and the virtually imperceptible restarting of the engine with the start/stop function.

For the first time ever, AMG has made its AMG Dynamic Plus Package available on a six-cylinder model. Key highlights of the package include a drift mode, and a RACE drive program. Controls for those functions and further drive program settings can be located on the freshly-designed dinamica wrapped AMG performance steering wheel.

Aesthetically, the most noticeable change has happened at the front end. The E53 now sports the AMG-specific Panamericana grille and sleeker LED-headlights. The front bumper has been thoroughly redesigned, as is the rear bumper which incorporates a more pronounced diffuser housing quad pipes. The LED taillights have also come under the knife and gives the rear end a truly dynamic, yet sporty look.

Inside, the E53 gets the latest MBUX infotainment system with a 12.3-inch central touchscreen and a 12.3-inch digital instrument cluster. The aging center console controller has also now been replaced by a more modern touchpad.

Mercedes-Benz South Africa has neither confirmed pricing nor an expected launch date for the arrival of the new E53. Pricing will be up on the current E53 Coupe though, which is priced from R1 436 600.