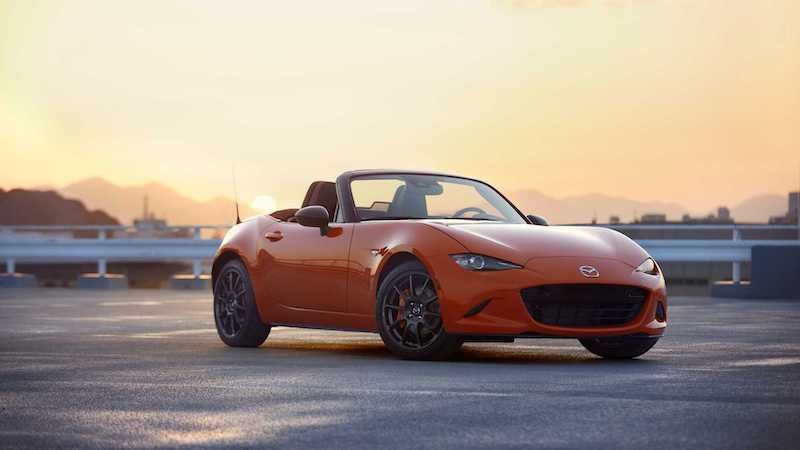 Mazda ​celebrated 30 years of its iconic MX-5, by unveiling a very special edition of the drop-top at the Chicago Auto Show​.

Named the MX-5 Miata 30th Anniversary Edition, the model honours the original MX-5 that debuted back in 1989, and will be available in both soft top and retractable hardtop RF guises.

Thinking back, the MX-5 has been an incredibly successful vehicle for Mazda, selling over 1 million units worldwide, and racking up over 280 awards globally. This just shows the unshakable support of Mazda owners and fans all over the world towards the MX-5 over the past three decades.

The interior also gets the treatment and features Alcantara-upholstered Recaro​ bucket seats, and orange detailing and trimmings throughout. There's plenty of under-the-skin trickery too, including Bilstein ​dampers and Brembo​ brakes.

Power comes courtesy of the same naturally-aspirated 2.0-litre four-cylinder SKYACTIV-G engine that features in our local MX-5, good for 118kw and 200nm. It is available with a six-speed manual as standard, although a six-speed automatic is optional.

No special edition would be complete without the appropriate badging. Each MX-5 30th Anniversary model will be affixed with a special "30th Anniversary" serialized badging on the driver's side rear quarter panel to help commemorate 30 years of endless gratitude and unbending determination to keep evolving.

While the vehicle has been confirmed for release in the USA and Australia, sadly Mazda Southern Africa​ have yet to confirm if it will make it to Msanzi. That said, all 500 units that are scheduled for the United States sold out in just four hours on its reveal.

Currently, the MX-5 line-up in South Africa consists of a single model - an automatic version of the MX-5 RF (Retractable Fastback) - and is priced at R538 200.