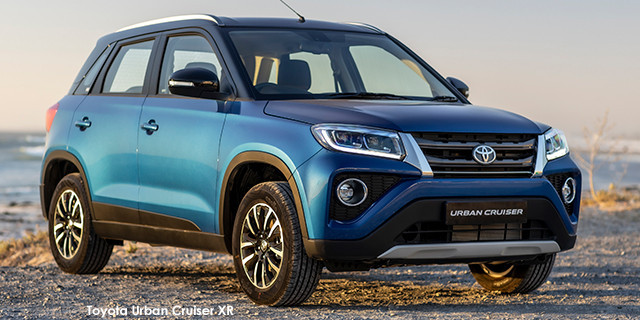 Last month, Suzuki launched their highly successful Vitara Brezza in South Africa. This charming compact SUV managed to live up to its bargain-for-buck reputation and has done very well in terms of sales in its first month. But here's the thing, agreements were made, you see Toyota and Suzuki have made an international alliance. This basically means that the two Japanese brands will manufacture each other’s vehicles, slap their logos on them, and sell them as their own. That brings us to the all-new Toyota Urban Cruiser, keep in mind we use the term ‘all-new' loosely because it is in essence a rebadged Vitara Brezza. This will be Toyota SA’s second product to come out of this alliance, with the first being the Starlet which has become a major hit for the brand. We recently spent some time with the Urban Cruiser and despite being identical to the Brezza, the Urban Cruiser has managed to hit a sweet spot.

As we mentioned before, everything down to its engine is the same as the Brezza. The Urban Cruiser gets a 1.5-litre engine and produces a reasonable 77kW of power and 138 Nm of torque. Much like the Brezza, the Urban Cruiser proves to be just as impressive, with the handling and drive being very comfortable. There are a few complaints here and there, like its lack of torque and noisy grunts it makes on the highway but nothing substantial enough to make you turn away from the Urban Cruiser.  The Urban Cruiser comes fitted in both a five-speed manual and a four-speed automatic gearbox. Our test unit was the top-of-the-line Xr trim, which means we got the Japanese’s very smooth four-speed automatic gearbox. Now there are many talking points about why Toyota believes the Urban Cruiser will do well, but the evidence is all in its exceptional fuel-consumption. Which, thanks to Suzuki’s brilliant fuel-efficient engines, sits at just 6.2-litres/100km.

Yes, we know, you are probably tired of reading how similar the Urban Cruiser and Brezza are. Well, good news because Toyota has made some slight adjustments to the exterior. The Urban Cruiser in some ways looks more dominant. The front does get some changes, with a different bumper and grille. The Urban Cruiser drops the Brezza’s chrome grille for a black one, which in our opinion looks a lot better. At the rear, not much changed as it still comes with a large decorative chrome bar with the name ‘Urban Cruiser’ across it. The Xr trim does further benefit from LED fog lights which also sets it slightly apart from the Brezza. Overall, the Urban Cruiser looks more appealing in terms of an SUV and something about it makes it feel a lot more assertive on the road. Whether it’s the Toyota badge or the minimal changes, you are certain to feel confident behind the wheel.

The cabin of the Urban Cruiser is identical to the Brezza, which is not a bad thing. In our Brezza test review, we practically raved about how comfortable the interior was, and this is no different. The Urban Cruiser, we repeat, is the perfect bargain-for-buck compact SUV. Features like its touchscreen infotainment system that offers both Apple CarPlay and Android Auto make the Urban Cruiser feel a step out of its price range. Its seats are comfortable and since our trim was the Xr, we got to enjoy Toyota’s splendid leather-wrapped steering wheel. The Urban Cruiser even gets equipped with a reverse camera, which we still find quite surprising considering that it is available across all trims. It seems that Toyota has kept Suzuki’s value-for-money hack proving that quantity can sometimes overrule quality.

Comparing the Urban Cruiser to the Vitara Brezza maybe a very difficult task to do. Not only are they identical but both are equally impressive. In our opinion, you cannot go wrong with either but if you are wanting something a bit more appealing and you value a brand that holds a rich heritage in our country, then the Urban Cruiser maybe your best choice. Overall, the Urban Cruiser is exceptional, and given the fact that Toyota has 200 dealerships across the country, we may even jump the gun and predict that the Urban Cruiser may do even better in terms of sales. Toyota has already managed to revive the Baleno shape with the Starlet, so slapping their badge on Suzuki’s hottest compact SUV only makes sense.

Buy a new or used Toyota Urban Cruiser at a great price.
We put you back in control, make a single request and get up to 3 quotes from dealers nationally.
Get Quotes

All the luxury, none of the cost: Posh SUVs for less than R1 million
Reviews
Menu