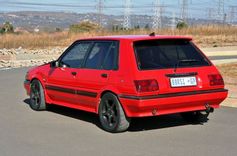 Would it be fair to say that in South Africa, the Conquest RSi was a more revered and respected car than the iconic Supra? We seem to think so. Thirty-two years ago, Opel and Volkswagen were so feverishly battling for ‘hot-hatch’ supremacy, that they totally missed this little beaut coming in and eclipsing both of them!

In 1986, Toyota SA launched their rather special Conquest RSi. The angular Conquest RSi formed the third part of Toyota's high-performance 1600 Corolla trio in the form of the Conquest RSi, the Avante GLi, and the Sprinter GLi. Surprisingly, the Conquest RSi which carried a sticker price of R21 390, weighed the most out of all the ‘performance’ Corollas, apparently because of its large and strongly constructed rear hatch.

The generously-specced Conquest RSi was subtly different from the cooking Conquests, with brilliant sport seats up front, a leather-wrapped sport steering, a leather shifter, as well as minute tweaks to the front and rear bumpers to aid performance. Famously quicker on the street than both the larger engined Golf GTI 1.8 8V and the Kadett GSI 1.8 8V, the little RSi was powered by Toyota's 4A-GE 1.6-litre 16V motor which produced an admirable 86kw and 136nm, and redlined at a screaming 7600rpm!

The 970kg Conquest went on to run the benchmark 0-100kph sprint in 9.33 secs, and had a GSi beating top speed of 200kph. Those that were fortunate enough to experience it, proclaimed it a true 'point and squirt machine with prodigious capabilities'.

Blessed with a precise steering, a brilliantly firm chassis and independent suspension all round, it went on to become a racing and rally icon, with one such highlight being the gruelling Castrol 6-hour Endurance race at Killarney International Raceway, where the team of Mike White and Serge Damseaux beat Sarel van der Merwe’s GTI Golf, various GSI Kadett’s, BMW 528i's and Alfa GTV6’s to the checkered flag, ensuring that Toyota won the Dealers Championship for Group N racing that year.

And over the last three decades, it has become a modifiers dream, with the 4A-GE proving capable of massive amounts of power. Sure, some swap it out in favour of the high-revving 20-valve 4A-GE, but the regular 16V 4A-GE has even more potential. It’s hard to believe that the Conquest RSi is 32 years old, yet even today, in a world of turbocharged hatchbacks, it might not be able to keep up in a drag race, but it will sure turn heads. After all, who wouldn't respect one of the most legendary Toyota's ever made.