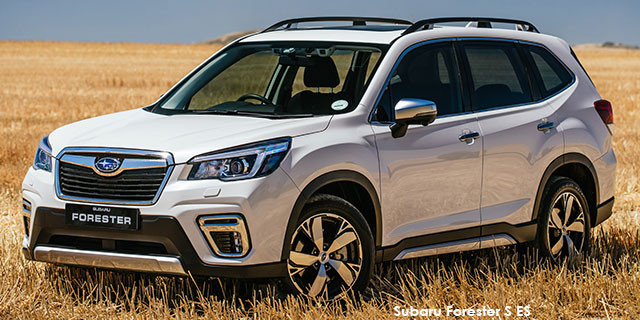 Subaru’s fifth-gen Forester is their best yet, but can it deliver the goods in an increasingly competitive market?

For over 22 years, the Subaru Forester has been the quintessential compact SUV, and the logical choice for anyone wanting to traverse anything from mountain passes, to dirt roads, to the urban jungle – in the quickest way possible. This was further emphasized by Subaru’s original launch slogan "SUV tough, Car Easy".

The Japanese-built SUV created a stir in the late 90s when Subaru shoehorned their iconic 2.0-litre turbocharged EJ20 boxer motor in the Forester, gifting it an output of a staggering 190kw. It immediately cemented the Forester’s street credibility as the SUV to have, if versatility and speed was your cup of green tea.

Fast forward nearly two decades, and the Forester is a household name, with an enviable following around the globe. However, in recent years, Subaru have started to streamline their product offerings and have somewhat changed focus with some of their models, most notably the Forester. It might not have a high-output engine like previous versions, but the latest version of the Forester is just as capable off-road, and been blessed with some state-of-the-art safety technologies.

For 2019 though, Subaru has launched their latest incarnation of their much-loved ‘car-like SUV’, and it has been made available in South Africa in three specification levels – 2.0i, 2.0i L-ES and the flagship 2.0i S-ES. It is important to note that this new Forester is an all-new model, and not a facelift.

While many may be disappointed that the new Subaru Forester looks very little like the Subaru Viziv Future Concept that previewed it, don’t let its sedate looks hide the fact that this SUV is sporting some impressive technology under the skin. In fact, it is fair to say that the styling of the new Forester is more evolutionary than revolutionary, and is strongly reminiscent of the model it replaces, with LED headlights and a more wind-swept front end standing out as the most obvious updates.

With all-new design and engineering, the new Forester is designed around the Subaru Global Platform (SGP), that sees its wheelbase grow by 30mm to 2670mm overall, resulting in the roomiest cabin in its history, while retaining the manoeuvrability that's synonymous with the popular Subaru, whilst delivering major improvements in safety, ride, handling and occupant comfort.

The leather upholstered seats are well bolstered and firm, with good headroom, and thanks to the extended wheelbase, it has an additional 36mm of rear seat legroom and a 13cm wider rear door opening, allowing rear passengers more space to get in. Despite the meaty A-pillars, the driver enjoys a fairly unobstructed view in all directions. Cargo space is a generous 520 litres, and this expands to 1,060 litres with the rear seats dropped down.

Despite three specification levels, there is only one motor on offer and it sadly isn’t force fed. Under the hood is a naturally-aspirated 2.0-litre Boxer motor that outputs 115kw and 196nm. Compared to its predecessor, this petrol engine produces an additional 5kw, whilst torque is down by a meagre 2nm. That said, its peak torque is now available across a wider range, meaning a 13% improvement in fuel economy to average 7.6L/100kms. Subaru SA has confirmed to us that they are working hard on launching a turbocharged engine variant locally, but that is likely to only happen early in 2020.

Subaru has been quite the pioneer when it comes to continuously variable transmissions, so it comes as no surprise that the new Forester features a CVT. In fact, the SUV is available exclusively with a Lineartronic continuously variable transmission, and features stop-start technology. It also features the familiar SI-Drive, Subaru's drivetrain management system that allows you to specify quicker throttle response and more aggressive transmission 'shifting' from the CVT when switched from Intelligent to Sport driving mode.

As expected, the Forester proved incredible on the novice off-road course we attempted. This is in part, thanks to the new X-Mode system which debuted on the fifth-gen Forester. The system which works together with an asymmetrical all-wheel drive system, automatically adjusts the throttle power in off-road driving, took charge and left us to only steer in difficult driving conditions.

The X-Mode differs from previous versions in that it offers two modes - one for driving in snow and deep mud and the second for driving in sand and snow. Also integrated into the package is Subaru's Hill descent control, which further bolstered its off-road capabilities. And as before, it boasts class-leading ground clearance of 220mm, but more consideration has been given to improved departure (25.8 degrees) and break-over angles (21.4 degrees). All have been optimised to conquer obstacles without sustaining damage or getting stuck.

Speaking of additional impressive tech, the Forester features a truly innovative piece of tech called EyeSight Driver Assist, which further works with Pre-Collision Braking and Throttle Management; Adaptive Cruise Control; Lane Departure and Sway Warning; and Lane Keep Assist. This system is standard equipment on the 2.0i-S ES and the 2.0i-L ES derivatives, further reinforcing the Forester as the safest mid-sized SUV in its class at this price point.

This cutting-edge system works like a second pair of eyes for the road ahead, using a pair of stereo cameras to capture colour images with excellent image recognition up to 110m ahead-nearly as capable as the human eye. One of the system's key features is its ability to spot potential danger such as other vehicles, pedestrians, bicycles or motor cycles and warn the driver in due time or even apply emergency braking if needs be to prevent a collision or at worst, reduce the damage of a collision.

Much like the rest of the Subaru model line-up, the Forester boasts an impressive list of standard features across the range. Most notably are a high-resolution touchscreen infotainment with smartphone integration, Apply CarPlay, Android Auto, Bluetooth control with switches to operate these on the steering wheel as well as voice-command functionality and four USB ports. Also, standard are electric windows, electric parking brake, electric side mirrors, multi-function display, remote keyless entry, a security system with engine immobilizer and powered seats for the driver and passenger.

The new Forester continues the model's tradition of offering a car-like ride with the impressive handling we have come to expect from a Subaru. Standard symmetrical full-time all-wheel drive, a hallmark of Subaru's vehicles, provides unrivalled all-weather confidence and capability, whilst paired with the spaciousness of an SUV. The Forester is priced at R429 000 for the 2.0i, R469 000 for the 2.0i-L ES and R499 000 for the 2.0i-S ES you see here. All come standard with Subaru's 5yr/150 000km warranty and a 3yr/75 000km Maintenance Plan which is further extendable to a 5yr/150,000km.

Buy a new or used Subaru Forester at a great price.
We put you back in control, make a single request and get up to 3 quotes from dealers nationally.
Coming soon