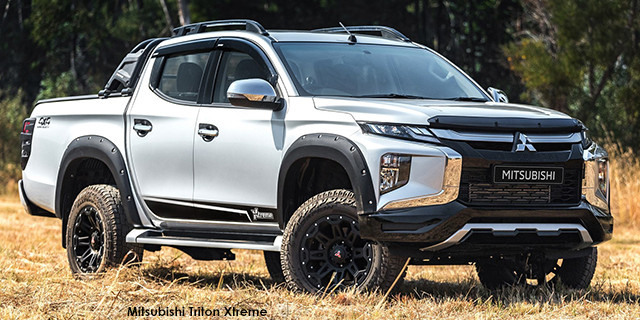 South Africa loves pick-up trucks, or ‘bakkies’ as they’re more commonly known. In fact, it’s one of the biggest market segments in our country, with names like ‘Hilux’ and ‘Ranger’ coming to mind. One of the lesser mentioned names of the segment invokes the image of the Greek ocean god, Poseidon, and his signature three-pronged staff, the Triton. Mitsubishi lent us their shiny new bakkie for a week, and after spending time in the new Toyota Hilux Legend 50, it was rather interesting, and refreshing, to sample the dark horse of the bakkie market.

The design is bold and futuristic. The Mitsubishi Triton doesn’t attempt to conform to the traditional curvy-boxy design language that is common in the latest generation of pick-ups. The Tritons lines are sharp, dramatic and dangerous-looking, giving it a menacing appearance that is only complemented by the sleek LED headlights and the abundance of chrome that wraps itself around the exterior. Our test unit was finished in a colour called White Diamond, which contrasted nicely with the chrome accents and black details, although if you’re looking for a more distinguishable colour then alternatives like Sterling Silver, Graphite Grey and Sunflare Orange are available to choose from.

The intriguing design sets a very high bar of excellence for the interior and I was pleasantly surprised to discover that the cabin did in fact, live up to this standard. The comfortable seats are finished in leather with premium stitching and an abundance of head, leg and shoulder room, ample enough to accommodate 5 adults. The premium-luxury vibe is continued through to the infotainment system, which offers Bluetooth, USB and Apple CarPlay from a bright and crisp touch screen. Another useful feature is cruise control, which can be used to keep the fuel consumption as close to the claimed 8.3-litres/100km as possible.

The entire Triton range is powered by one engine – a 2.4-litre turbodiesel powerplant, producing 133kW of power and 430Nm of torque, sent to all four wheels through a 6-speed automatic transmission. Driving the Mitsubishi Triton is a smooth experience and that experience only gets better on an open road where it can put its power down and cruise. Overall, it’s a well-packaged product, although its starting price tag of R519,995 may have potential buyers considering other options. All things considered, the Triton is a fantastic bakkie and should definitely be considered if you’re in the market for a dedicated workhorse with the refinement of an SUV.

Buy a new or used Mitsubishi Triton at a great price.
We put you back in control, make a single request and get up to 3 quotes from dealers nationally.
Coming soon