THE NEW STANDARD - Mercedes-AMG A45 S 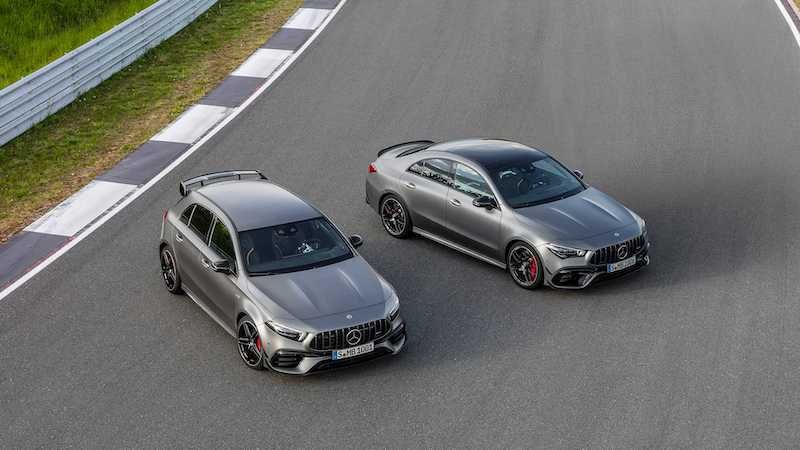 THE NEW STANDARD - Mercedes-AMG A45 S

After an extremely lengthy teaser campaign, Mercedes-Benz used the recent Goodwood Festival of Speed to finally unveil their new generation of ultra-high performance compact cars – the all-new Mercedes-AMG A45 S and its low-slung sibling, the CLA45 S.

With its new compact sports models Mercedes-AMG is demonstrating its high competence in development once again: "We have completely redesigned our "45" models - from the engine and transmission through the chassis, the elaborately constructed drivetrain to the body structure and of course the design itself - all with one goal: to raise vehicle dynamics and the sporty driving experience to a level previously unimaginable in the compact class. With the presentation of this, our most powerful and most dynamic compact sports car, we are also reinforcing the significance of this segment for our growth strategy", says Tobias Moers, Chairman of Mercedes-AMG.

But before we go any further, let’s get the numbers out of the way. When the original A45 debuted in 2013, it was the smallest-engined production AMG ever made, and featured a turbocharged 2.0-litre under its hood that was good for an impressive 265kw and 450nm. As the hyper-hatch rivalry heated up with Audi, an update to the A45, now christened the AMG A45, saw power increase to 280kw and 475nm – in the process giving the compact Benz a specific power output per litre that rivalled the Bugatti Chiron.

And as the war with Audi raged on, AMG knew that they had to do something truly special to pry the title of hyper-hatch king from their German rival. Enter the new Mercedes-AMG A45 S. Not only does it trump Audi’s RS3 in the power and performance stakes, but it sets new benchmarks for what is possible from a production four-cylinder motor.

Much like other AMG lines, there are two versions of the A45 available – the A45 and the A45 S. Depending on your market, you’re likely to have a choice of two, but in South Africa, we will be getting just one variant – the full-fat A45 S. And that’s great, because the A45 S produces an incredible 310kw and 500nm from its new ‘One-man-one-engine-built turbocharged M139 2.0-litre powerplant. AMG has also binned the old 7-speed DCT from its predecessor in favour of a newly developed 8-speed dual-clutch transmission. The result is 0-100kph in an Audi RS3-beating 3.9 seconds and a top speed of 270kph!

The new engine excels with numerous intelligent design features. Unlike the likewise transversely installed four-cylinder in the 35 models or the preceding model, the new engine is rotated around its vertical axis by 180 degrees. This means that the turbocharger and the exhaust manifold are now positioned at the rear, on the side of the firewall when viewed from behind. The intake system is therefore positioned at the front. This configuration allows the flattest possible and aerodynamically advantageous front section design. Furthermore, the new arrangement allows much improved air ducting with shorter distances and fewer diversions - both on the intake and exhaust side.

These further differentiates the A45 from the A35, together with an uprated engine, bigger brakes, a different transmission, and most importantly a very special 4MATIC all-wheel drive system. Apart from chassis updates over the 225kw A35, the A45 S gets a very sophisticated all-wheel drive system that – much like the E63 S – has a dedicated drift mode – which is standard on the A45 S. Rather than a single differential routing power to the rear, there are multi-disc clutches for each wheel at the rear. This layout allows for quick reacting torque vectoring that can send up to 100 percent of the power to a single corner. Sensors monitor traction, throttle position, yaw angle, and steering angle to determine how to proportion the torque.

The optional AMG RIDE CONTROL adaptive damping system enables the driver to choose between three different suspension control modes. The spectrum ranges from comfort-focused to sporty. The system operates fully automatically, adapting the damping forces for each wheel according to the driving situation and road conditions. This happens within milliseconds and is infinitely variable, with a wide spread of damping characteristics. The result is that it ride comfort and agility are enhanced in equal measure. There are also six AMG DYNAMIC SELECT driving modes "Slippery", "Comfort", "Sport", "Sport +", "Individual" and "RACE" and allow a wide spread of vehicle characteristics, from comfortable to dynamic.

But it’s not just about its raw pace, because the new A45 S is a serious head-turner. Its significantly more aggressive than the A35 and features bigger wheels, larger intakes on the bumpers, a more pronounced rear diffuser, quad pipes out the rear, a large rear spoiler, and trademark Panamericana grille up front. The interior also gets an AMG-specific MBUX system as well as AMG bucket seats, an AMG steering wheel, and other distinct AMG touches throughout the cabin.

The Mercedes-AMG A45 S is set to have its global public debut at September’s Frankfurt Motor Show - and will be in European showrooms before the end of the year. The CLA 45 S meanwhile is set to arrive in South Africa - together with the spicy A35 in sedan and hatchback variants – in the coming months. The AMG A45 S though, is expected to land either before the end of 2019 or in early 2020; with pricing and final specification set to be announced closer to its launch date.