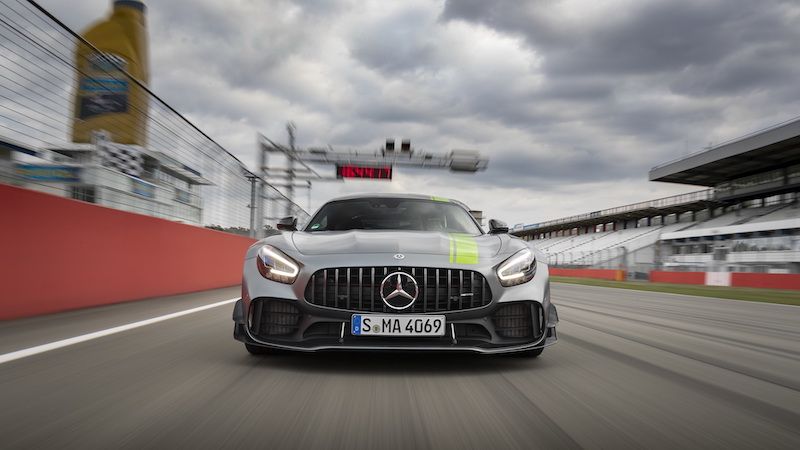 We’ve known for some time that Mercedes-AMG will be releasing a ‘Black Series’ variant of their AMG GT R, as a swansong for the current AMG GT range. Not just because AMG bossman Tobias Moers has confirmed it, but because it’s been spotted pounding around the Nurburgring.

And now, thanks to an Instagram post by someone who claims to have ordered one, we know that it will produce far more power than the AMG GT R Pro (pictured). Instagram user ML (@fastcarsandguns) has ordered one from Mercedes-Benz Malaysia and even went as far as posting his ‘Offer to Purchase’. He went on to say that according to Mercedes-Benz Malaysia, the production of the supercar is expected to begin in the third quarter of 2020, with deliveries expected to be in full swing by early 2021.

The most important bit of information he posted though, was the cars power output. He claims that it will produce in excess of 700 horsepower – which translates to over 522kw. To put that into perspective, that is more power than the 515kw Porsche 911 GT2 RS and just shy of the McLaren 720S’ 527kw output. Although, the post does say “it has 700+ HP”, so the final output is anyone’s guess. It’s also worth noting that Tobias Moers says that the Black Series is aimed at the GT2 RS and the 720S, so those power outputs are more than likely.

The AMG GT4-inspired GT R Black Series is expected to use a modified version of the 4.0-litre biturbo V8 that powers the regular AMG GT R and the GT R Pro. In both those models however, power stands at 430kw, but we do know that in the AMG GT 63 S, the very same motor – albeit with some minor differences – boasts an output of 470kw. It remains to be seen if Mercedes will incorporate any of its EQ hybrid technology into the Black Series. Expect it to best the GT R Pro’s 0-100kph sprint time of 3.6 seconds and 318kph top speed.

What will be interesting to see is how AMG manage to unleash all of that power. Just about all of the high-powered AMG sedans currently on offer, i.e. E63 S, GT 63 S, etc. all have an AMG-tuned 4MATIC+ all-wheel drive system to cope with the incredible amount of power. The AMG GT R and GT R Pro are rear-wheel driven, which is why many originally predicted that AMG would opt for a slightly more conservative output, in the region of around 450kw.

Much like the SLS AMG before it, the AMG GT R Black Series will likely go on an extensive diet, becoming a road-legal race car, whilst sprouting an even more aggressive exterior than seen on the GT R. Expect larger brakes, a revised suspension setup and tweaked steering, to aid its track-focused handling. Thanks to these revisions and a massive hike in power, it should easily eclipse the GT R Pro’s best Nurburgring effort of 7:04 – which in itself was 4 seconds quicker than the McLaren 720S, but a mammoth 17 seconds slower than the 911 GT2 RS.

If the Instagram post is to be believed, it’s likely the AMG GT R Black Series will be unveiled at next year’s Geneva International Motor Show. And much like its SLS AMG Black Series predecessor, expect a mega price and extremely limited production numbers.