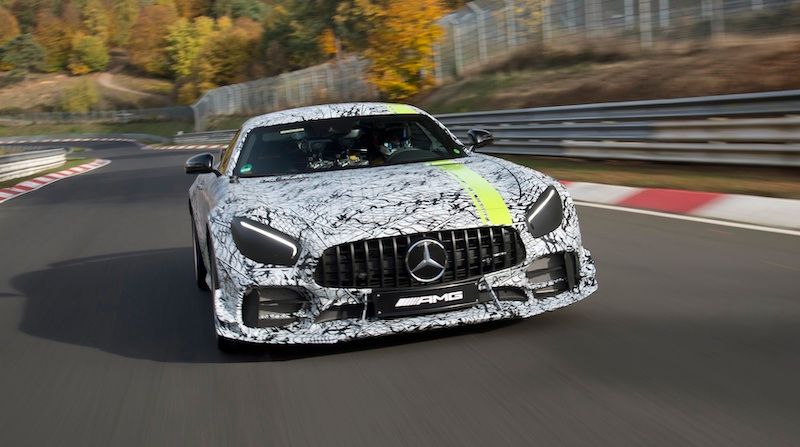 For an over a year, there has been a ‘Green beast’ circulating around the Green Hell. But this camouflage donning AMG GT R was no ordinary AMG GT R. It was the test bed for something so much more.

Then a few months ago, AMG Bossman, Tobias Moers, said that they have been working on a hotter version of the already bombastic AMG GT R, and suggested it would be called the ‘Club Sport’. Essentially, a lighter, faster, meaner version of the AMG GT R.

And just this week, Mercedes confirmed they will be bringing something very special to next week’s Los Angeles Auto Show. Aside from the AMG GT 63 S, the G63, the EQC electric crossover, and a handful of Mercedes’ core models, they will be unveiling their new flagship supercar, the AMG GT R Pro.

Originally known as the GT R 'Clubsport', the limited edition model is expected to boast some trick aerodynamics, a retuned suspension, more power and less weight. It will retain the same biturbo 4.0-litre V8, but it’s expected that power will jump from 430kw to around 450kw. Mercedes-AMG has naturally been coy on the revisions to the AMG GT R, but for now they are just saying that the car has been developed using lessons learned from the their GT3 and GT4 racing programs.

The folk from Affalterbach have since released this teaser image, showing that 'something quick' is indeed coming. The GT R Pro is expected to go head-to-head with the Porsche 911 GT3 RS. It's also important to remember that the GT R Pro is not the equivalent of the 'Black Series' - that model has been confirmed, and will likely follow in the next 2 years.

AMG will also unveil their facelifted AMG GT models at the show, expected to showcase key changes to their styling and possibly some extra power. The interior is also presumed to be updated to match that in the new AMG GT four-door coupe.