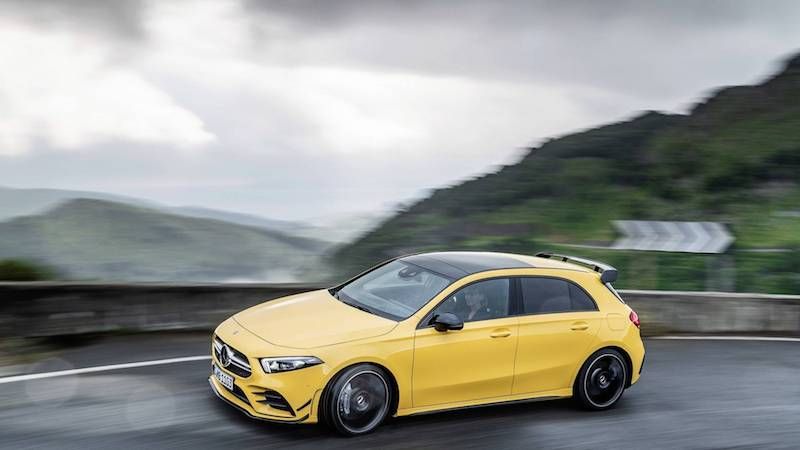 When Mercedes-Benz started ramping up their teaser campaign for their hot new A-Class, we knew a reveal was imminent, and today… we finally see it. This is the first-ever Mercedes-AMG A35 4MATIC, a hot hatch that represents the most affordable AMG in the current line-up.

The A35, will sit below the A45 and A45 S, and will go up against the Audi S3 Quattro and Volkswagen Golf R when it reaches market early next year. Whereas the South African-spec S3 and Golf R use a 2.0-litre turbocharged motor to produce 228kw and 213kw respectively, the A35 hits back with a high-tech motor of its own.

Powering the A35 is a 2.0-litre turbocharged petrol motor that is actually an improved version of the M260 4-cylinder currently used in the 165kw W177 A250, and now outputs 225kw and 400nm. The motor, equipped with CAMTRONIC variable valve control, intelligent thermal management for engine and oil, high-precision piezo injectors and multi-spark ignition; utilizes a twin-scroll turbocharger that sees its housing divided into two parallel ducts. Together with two separate exhaust ducts in the exhaust manifold, this makes it possible to channel the exhaust gases separately on the turbine wheel. Speaking of the exhaust system, the A35 features an AMG exhaust system with an automatically-controlled flap modulating the sound that can be varied from depending on drive mode.

Despite being based on a front-wheel drive platform, the A35 uses an AMG Performance 4MATIC all-wheel drive system, and paired with an AMG SPEEDSHIFT DCT 7G dual-clutch transmission, and a RACE-START launch control system, it can sprint from 0-100kph in just 4.7 seconds, just 0.1 seconds slower than the original 265kw A45 AMG, and reach an electronically limited top speed of 250kph. By comparison, the S3 will do 0-100kph in 4.6 seconds, a time matched by the Golf R.

The braking system has also been upgraded, with its ventilated discs now measuring 350mm up front and 330mm at the rear, held by 4 pot calipers and single pot calipers respectively. The chassis has also been stiffened up thanks to an aluminium plate bolted under the engine and two additional diagonal braces up front, while the Haldex-based 4MATIC system can send up to 50 per cent of torque to the rear axle, should the need arise. There are also five drive modes - Slippery, Comfort, Sport, Sport+ and Individual – each of which alters the response of the engine and transmission. AMG has also fine-tuned the ESP system, with 'Basic' and 'Advanced' modes on offer, while the optional adaptive damper systems come with three modes as well.

The interior is builds on the already impressive A-Class, but gains subtle AMG touches like its AMG Sports seats, a flat-bottomed AMG steering wheel, as well as AMG display styles and content for the dual-screen MBUX system. AMG TRACK PACE is also available as an option for the A35. The virtual race engineer is part of the MBUX multimedia system and permanently records more than 80 vehicle-specific data (e.g. speed, acceleration) while driving on a race track.

The aggressive A35 looks distinctively different from the A250 AMG-line, sporting a radiator grille with twin louvres, cunards up front complimented by a front splitter, 18-inch multi-spoke alloy wheels, deeper side skirts, a more defined rear diffuser paired with dual pipes, and a large rear wing. If this is anything to go by, the 300kw+ A45 and even more hardcore A45 S will look fantastic, when it is revealed some time next year.

The A35 will have its public debut at next month's Paris Motor Show, before reaching showrooms in Europe in January 2019. Expect Mercedes-Benz South Africa to launch it locally early next year.