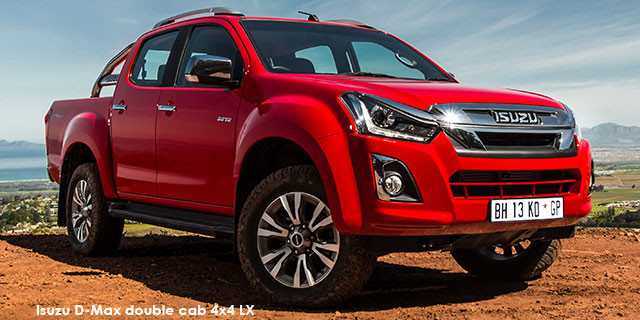 Despite initial fears that Isuzu was a goner, the automaker has restructured their local operations and are growing faster than ever

After 40 years, the Isuzu KB is no more. Because the Isuzu D-MAX has officially landed. If you're a little confused, just know that Isuzu South Africa finally brought their legendary pickup in line with what it is called in international markets.

For the new model year, Isuzu has refreshed their pickup, with the range now spanning an extensive portfolio comprising of 30 models for South Africa and 13 models for export markets, with the top-spec derivatives gaining a more luxurious execution that reflects the more sophisticated requirements of top-end buyers in this segment.

One of the most significant new features of the Isuzu D-MAX range is the introduction of an all-new six-speed manual gearbox on the high-spec 3.0-litre LX derivatives, replacing the five-speed versions used on the outgoing models. The six-speed manual benefits from optimised gear ratios and an improved shift action, and makes the most of the strong torque delivery and superb fuel economy of Isuzu's dependable 3.0-litre four-cylinder intercooled turbodiesel engine, which produces 130kw of power and 380nm of torque.

The D-MAX also offers the same six-speed transmission that recently debuted in the Isuzu mu-X SUV. The six-speed automatic incorporates a sequential sport mode that enables the driver to select a specific gear manually, which is helpful when towing as the engine speed can be maintained in the ideal torque range for maximum pulling power. This mode is also ideally suited to off-road driving, allowing the driver to engage the appropriate gear ratio for the specific terrain. Combined with Hill Descent Control (HDC), manually selecting the lowest gear on downhills ensures optimal control of the vehicle as it maintains the vehicle at the set speed on steep descents. As before, wading depth stands at 600mm paired with 220mm of ground clearance.

Central to the new look is a muscular new chromed radiator grille that dominates the front facia, along with new tapered chromed accents extending across the full length of the sleeker L-shaped headlight clusters. In combination with the new projector-type Bi-LED headlamps and LED daytime running lights introduced on the extended and double cab models, there are restyled foglamp bezels framed by chromed vertical accents that give the LX a distinctive and aggressive character.

But while Isuzu is growing at a rate of knots, what’s going on behind the scenes? Aside from investing heavily in their dealer network, their overall investment in South Africa has not only preserved 1000 direct jobs, but it has also secured around 4000 jobs in Sub-Saharan Africa. This drive for growth is clearly yielding almost immediate dividends, because for the first time in 2018, Isuzu became the highest volume selling truck brand in South Africa.

But there were changes on all fronts, as late last year; after a 21 year stay, Isuzu Motors South Africa relocated their production facilities from Kempston Road in Port Elizabeth, to their headquarters in Straundale, Port Elizabeth. Compared to the Kempston Road location, a 50% improvement in space utilisation under one roof was achieved, and a 22% improvement in the overall amount of space required.

Speaking of tough markets, while the KB has accounted for 14% of all South African bakkie sales over the past year, out in Zimbabwe, they are growing too, increasing their market share from 18.5% to 25% in 2018. The Isuzu Double Cab was Zimbabweans choice, as the double cab bakkie market grew by 112% over the past year.