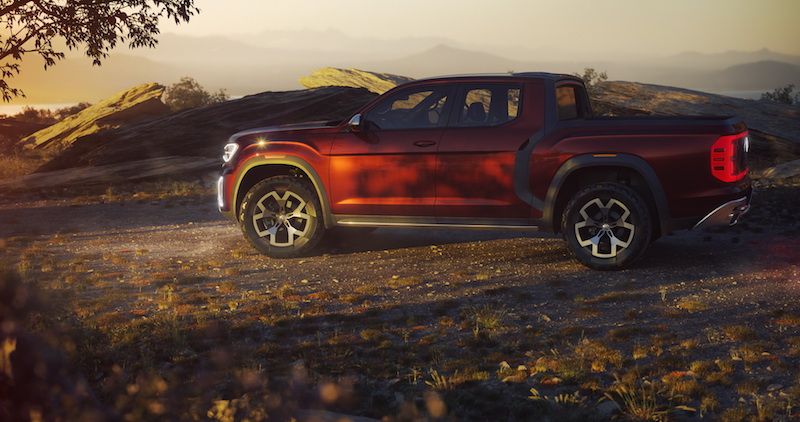 This is Volkswagen's Atlas Tanoak Pickup truck concept, named after a type of tree found on the US Pacific Coast.

The pickup which has just been unveiled at the New York International Auto Show is based on VW’s MQB platform, meaning it isn't meant to be as 'hardcore' as the Amarok. Instead - much like the Honda Ridgeline - is expected to ride more like a luxury SUV than a traditional body-on-frame pickup.

Powering the concept is a 206kw 3.6-litre V6 engine paired to an 8-speed automatic and the 4Motion all-wheel drive system. VW claims the Tanoak is capable of a 0-100kph in 8.6 seconds. While it is based on the Atlas SUV, it is mid-sized in dimensions.

Although the Atlas Tanoak is based on the production SUV, the pickup is completely redesigned. The interior seems based on the new Touareg with two large information screens dominating the dash, while there are also some nice touches like ambient lighting has been integrated into the instrument panel and the roofline console.

Volkswagen currently has no plans to put the Atlas Tanoak into production, however – it’s using its reveal at the NYIAS to gauge the level of interest and market fit and make a decision from there.