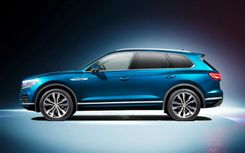 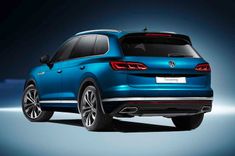 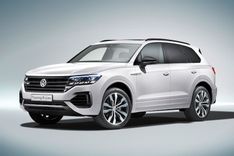 After a lengthy teaser campaign, Volkswagen has finally revealed its most technologically advanced yet - the third-generation Touareg.

The BMW X5 rival is larger than ever, and rides on the same platform as the upcoming Audi Q8, Porsche Cayenne, Bentley Bentayga and the Lamborghini Urus. Extensive use of aluminium in the construction of the new SUV has meant a 106kg drop in weight, but 116 litres more of space inside the boot thanks to the car’s longer and wider dimensions.

The interior is dominated by what Volkswagen calls its new ‘Innovision’ cockpit. The digital instrument panel is a 12-inch screen and the infotainment system gets a 15-inch display. As a result, VW says that designers and engineers have worked hard to try and get rid of as many buttons from the dashboard as possible. The luxury SUV also boasts VW's latest safety and assistance technologies including a thermal imaging camera, head-up display, semi-automated steering and lane keeping, LED matrix headlights and front cross-traffic assist.

The engine range will vary depending on the market, but there will be two V6 turbodiesels offered in 170kw and 210kw states of tune, a 310kw V8 turbodiesel, a 250kw V6 petrol, as well as a 270kw plug-in hybrid variant that's expected to arrive in 2019. Every engine option comes with an 8-speed automatic gearbox and an all-wheel drive system as standard.

Volkswagen South Africa's line-up will be announced in due course, with the first Touaregs expected in showrooms towards the end of 2018.