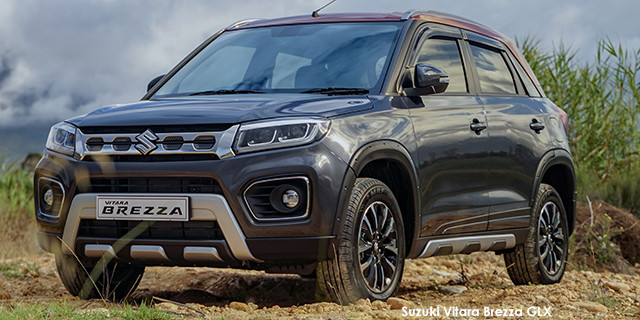 With a growing trend in the Compact SUV market, brands are racing to find a good balance between the crossover of the toughness and size of an SUV while still ensuring compact finishes and smaller parts.

Approaching the Suzuki Brezza from the front, the strikingly thick chrome bar connecting the headlights rounds off the front well. Although the chrome bar serves very little purpose, the visual toughness it represents gives this compact SUV a bull-bar it deserves.

The chrome bracket fitted around the headlight unit (tied in with the chrome bar) encapsulates the upturned LED horns and finishes off the front-end of The Brezza with an bold look and feel.

Overall, the robust look and build of the cosmetic changes to the front have certainly refreshed the Brezza, giving this new model a sense of sturdiness and strength.

Seated in the Brezza, you would be forgiven for thinking you were inside something bigger than what you would consider a ‘compact SUV’.

With a hand at the steering wheel, there were many occasions where the view over a vehicle in front was clear, giving ample time to anticipate a change in the road ahead or just feel bigger than the cars around.

With a ground clearance of 198mm, the Brezza is perfect for potholed and flooded South African roads and travels well over slightly rugged terrain.

However, with the notion in mind of good clearance, overdoing it could cause some damage as there is no all-wheel drive features on the Brezza. The power goes to the front wheels.

All Suzuki Brezza models are fitted with a single powered 1.5 litre naturally aspirated engine, with a mere 77 kW and 138Nm. The automatic engine too had as scratching our heads. But with this said, the small engine is very quiet and a standout feature of the Brezza. Seated in the cockpit, idling or with high revs, it should be noted just how quiet the Brezza is.

Handling of the vehicle is lightweight through the steering wheel, but you do lose out in feel and handling on corners.

Overall, the reliability and ease of use of the Brezza should not go unnoticed. The drive is smooth running and refined.

Simplicity of buttons and updated tech

The first thing that is noticed when climbing into the driver's seat is the simplicity of the layout and accessibility of all vehicle functions. Whether it be to adjust the air conditioner or reposition the electric powered windows, Suzuki have well thought out spacing dynamics and positions of the uncomplicated buttons. There is no over-bombardment of buttons and tech, but rather a system that just fits in.

The voice control system does work fairly well, but there were some problems getting her to understand an order on occasion. The sensitivity of the touchscreen can be a bit frustrating at times, but overall a good addition to the Brezza.

Cars considered ‘well priced’ tend to lack some features along the line and omit pricier features off the spec-sheet. However, the Brezza does not follow suit.

With the Brezza starting from just R244 900, Suzuki South Africa has given this compact SUV some serious thought. If you’re in the market for an SUV crossover on a budget, it is difficult to look past the Suzuki Brezza.