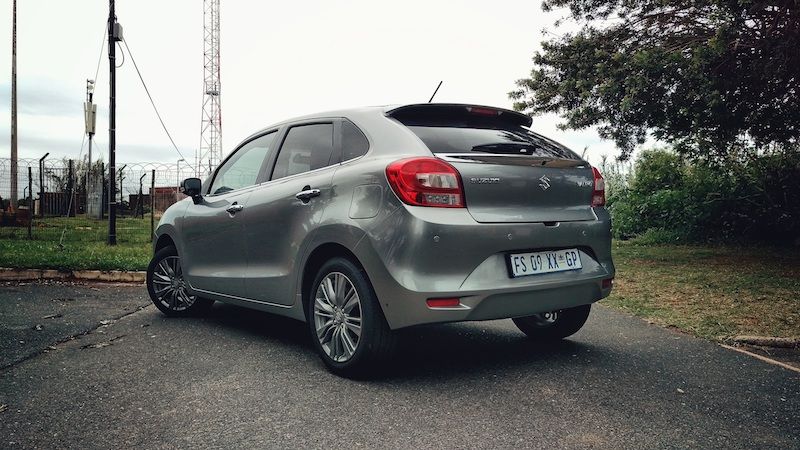 Baleno aims to appeal to those who want an affordable, practical and compact car.

There are two things that are important to me. Family and cars. And while that may sound like a cheesy Vin Diesel line from a Fast and Furious movie, it is the truth. While I have grown up with petrol coursing through my veins, my real passion are my dogs – my family.

While this might be a little complex for someone that isn’t a dog person to understand, I quite assure you this is the norm with fur parents. If you know me, you will know my world revolves around my English bulldog, Maximus – and his siblings. Recently I received a call from a friend in Richards Bay about a female English bulldog that urgently needed to be fostered. The sad reality is that life’s changing circumstances fell on her family and they couldn’t keep her anymore – with a broken heart, they have to find her another loving home. I was asked if I would accept her into my home, and being the gentle, animal-loving bloke that I am, how could I possibly refuse?

I would need to collect the little girl, Crinkle, a one year old female from Richards Bay, and as luck would have it, Suzuki’s new Baleno 1.4 GLX appeared in my driveway. While the name Baleno might be new to South African’s, it was actually a model range from the 90s. Production of the compact car ceased in Europe in 2001, and it was only in 2015, that a Suzuki wore the name Baleno again.

If there is one thing that South African’s lap up more that braai vleis and rugby, it is bakkies. However, in 4th place in terms of the priority hierarchy of Saffa’s sits compact cars. One of the most hotly contested segments this, with new offerings coming in thick and fast from the East, as well as Europe. Suzuki’s Baleno joins the fray in one of the fastest growing markets and certainly does so with a quality product.

The shape of the Baleno isn’t anything new. But it is distinctive and easy on the eye. Compared to the Swift, the Baleno is longer and wider yet lower. There is an attractive feature that rises from the headlight, over the front flank before dropping down and slowly climbing to meet the window line. Up front there's a bold grille with a large Suzuki 'S' logo while the defining feature of the rear is an interesting chromed mid-wing.

The weather forecast for the drive to Richards Bay was grim, but I packed up Maximus and myself and set out on our way for the 350-odd kilometre round trip. If there is one thing Maximus loves and that is road-tripping. He’s a fortunate guy, being my co-pilot in everything from Ferrari’s to Mercedes-AMG’s to Suzuki’s. How quickly he gets comfy in a car tells me a lot about a car, and in the Baleno he took all of 2 minutes to fall asleep. Safety is a massive concern to me, and with 2 airbags, EBD, ABS and BASEBA I was a lot more confident on our drive up.

But the biggest surprise about the Baleno, how quiet it is. On idle, you can barely hear the motor ticking over, and it stays relatively muted even when you work it hard. It’s enough to put some premium sedans to shame. The drive from Durban to Richards Bay is fairly flat, with the occasional uphill, but these did little to stress the Baleno. Torque at cruising speeds in 5th gear was more than adequate to necessitate changing down a gear or two. And with that, we averaged a meagre 5.1L/100kms on the return trip which is properly impressive.

While overseas markets get the Baleno with a few different engine options, in South Africa we have one motor doing duty in all specifications. It’s a naturally-aspirated 1.4-litre petrol motor that puts out 68kw and 130nm at 4,000rpm. The free-revving motor is mated to a smooth-shifting 5-speed manual gearbox. While the Baleno was never meant to be a ball of fire in terms of outright performance, it is relatively peppy, with Suzuki claiming a 0-100kph sprint time of around 10 seconds, while it will apparently top out at 175kph.

Underneath is a brand new platform that is around 10% stiffer yet 15% lighter than that found beneath the outgoing Swift. While the platform may be new, the suspension is the familiar mixture of MacPherson struts up front and a torsion beam out back. That low kerbweight also endows the Baleno with agile (if not hugely involving) handling. Despite the front end feeling a little soft - a situation not helped by slightly over-assisted steering - the Baleno offers decent fun for the enthusiastic driver. However, it was once we arrived in the CBD of Richards Bay did it come into its own, with its compact width and instantaneous throttle response turning the Baleno into a very effective city car.

Inside, the cabin is clean, uncluttered and comprised of hard-wearing plastics throughout. The dash is dominated by a 7” infotainment screen, while the leather wrapped multi-function steering is a pleasure to behold. It does have a rather fancy instrument cluster finished in a cool blue. Oh and did I mention the standard kit like cruise control, Bluetooth, electric windows all round, and a very powerful air conditioner? My only gripe with the climate control is that I had to take my eyes off the road to see what I was doing. Still, there is just enough grey trim to lift the ambience while the overall shape of the dash does add to the feeling of width within the car.

But the ace up its sleeve is space. Suzuki has packaged the Baleno cleverly, with good rear seat room for its size, but also a boot at 320 litres (astonishingly good for a supermini) and up to 756 litres with the rear seats folded. More than enough to lug all of Crinkle’s personal effects back to Durban.

While the Baleno is manufactured in India, reliability is typically Japanese. With smaller manufacturers, buyers always have a fear of the OEM pulling out of the country and leaving them ‘high and dry’. This is anything but the case with Suzuki, as the manufacturer is racking up awards left-right-and-center for its brilliant customer service. Giving further peace of mind is a 60,000km service plan and a 100,000km warranty that comes standard.

The Baleno - taking its name from Italian for a flash of lightning - has been getting rave reviews in the motoring press, and having spent a few days at the wheel of one, I can now see why. The Baleno range starts from R199,900 for the 1.4 GL, R229,900 for the 1.4 GLX and ends with the range-topping 1.4 GLX Auto at R244,900. If you are looking for an economical car which is just as happy on the open road as it is in town, then this new Baleno is definitely worth a look.