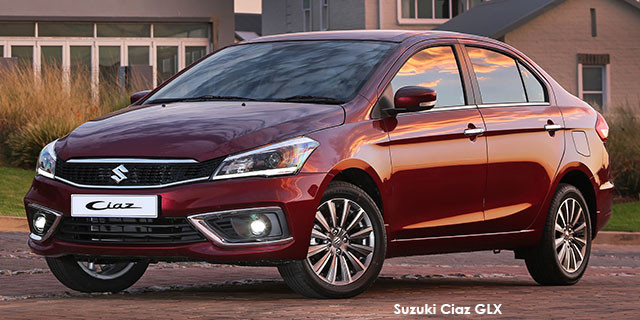 The Suzuki Ciaz was always somewhat of an underdog within Suzuki’s model line-up. The styling was bland, the engine was half-baked, and the overall feeling of the car was just… average. After being on the market for a few years, Suzuki hit the Ciaz with a full 180 and turned it into a really prime contender in the budget compact sedan segment through improved exterior and interior designs, a new engine and a variety of new and improved standard kit. We managed to get our hands on a Suzuki Ciaz GLX and spent a few days with it.

The most noticeable upgrades are found in the exterior and interior design of the new Suzuki Ciaz. The exterior receives a new grille which is a lot wider and more aggressive than before, nestled between two new automatic LED headlights. Below that is a new front bumper, which features more prominent air intake vents with integrated LED foglamps embedded within the bumper. A set of electrically folding side mirrors are included as standard, as well as LED tail lights and a high-positioned brake lights in the rear window.

The side profile is beautified by a set of new 16-inch chrome wheels, which is matched by the chrome details on the grille, front bumper, door handles, shoulder line and bootlid. Surprisingly, one would expect the abundance of chrome to give the car a tacky feel, but the chrome really does make the Suzuki Ciaz look very premium in relation to its competitors.

The premium treatment is carried on into the interior, where a set of leather seats comfortably supports passengers. The dashboard is where the real magic happened. A big 7-inch touchscreen display immediately pulls your attention to it. This is Suzuki’s new Smartphone Linkage Display Audi system, or SLDA for short. This system allows the driver to make use of features such as Apple CarPlay, Android Auto and Mirrorlink to integrate most smartphones into the display. Apple CarPlay is by far the best of these applications, allowing the driver to use iOS apps such as Apple Music, Apple Maps and even third-party apps such as Google Maps and Waze. The screen also supports the reverse camera, rear park distance control, Bluetooth connectivity and voice commands. The instrument cluster remains analogue; however, Suzuki has added a 4,2-inch colour display between the rev and speed dials to relay outside temperature, fuel consumption and economy as well as fuel range information to the driver.

The facelifted Suzuki Ciaz also includes a wide array of standard kit and creature comforts to add an enhanced feeling of luxury to the vehicle. Keyless entry and a start/stop button kick off the seemingly endless list of kit on the Ciaz. There are also electric windows, electric folding side mirrors, a retractable rear sunshade and leather upholstery across the cabin. Driving aids like cruise control, and automatic climate control are also included as standard on our test unit.

Finally, there is a new engine that finds its way under the bonnet of the facelifted Suzuki Ciaz. The petrol 1.4-litre motor of the predecessor is substituted by a new 1.5-litre petrol motor, yielding improvements of 7kW and 8Nm, bringing the total outputs to 77kW of power and 138Nm of torque. Buyers can choose between a 5-speed manual gearbox or a 4-speed automatic gearbox to send power to the front wheels. The new engine also manages to keep the Suzuki Ciaz just as economical as before, with Suzuki claiming consumption figures of 5.5-litres/100km on the manual variant and 5.6-litres/100km on the automatic variant.

Driving the facelifted Suzuki Ciaz makes for a pleasant experience. The ride quality is very good, and the engine feels nippy, yet economical. You really get the sense that Suzuki prioritizes offering good value for money. At a starting price of R216,900, the Ciaz is not exactly pricey and yet somehow Suzuki manages to shoehorn a lot of features into the compact sedan for next to nothing, making it a winner in our books.

Buy a new or used Suzuki Ciaz at a great price.
We put you back in control, make a single request and get up to 3 quotes from dealers nationally.
Coming soon