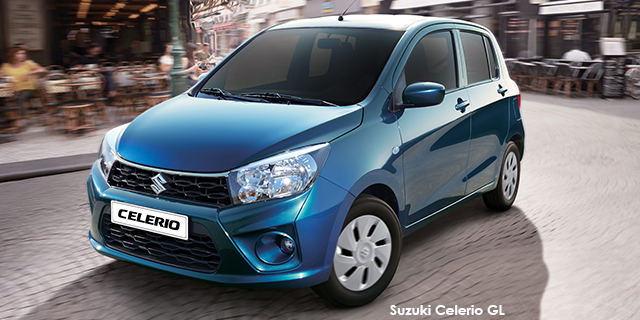 With a mega promotional warranty and a standard service plan, Suzuki’s new Celerio ticks all the right boxes

City cars are all the rage. With increasing fuel prices, the proliferation of compact cars have reached new highs, with automakers launching a slew of small vehicles that are now aligned very much with South African buyers’ tastes. Yes, Saffas love their bakkies, German sedans and luxury SUVs, but if you look at the sales figures, you will see that it’s the compact car market that is the most competitive.

Take Suzuki for instance. A brand that a decade ago could never have predicted the success they currently have in South Africa. Granted, this isn’t only down to their varied and affordable product line-up, but thanks to their stellar customer service as well, which sees them winning awards all over the place.

And while the latest Ertiga and Swift burn up the sales charts, Suzuki has introduced a refreshed version of their popular Celerio city car. The Celerio arrived in South Africa back in 2015 as a replacement to the Alto, and late last year, it underwent a facelift. Available in two specification derivatives, the Celerio once again uses a 1.0-litre three-cylinder petrol engine for propulsion. It is paired with either a 5-speed manual or a 5-speed automated manual transmission, with power sent to the front wheels.

As before, the motor produces 50kw and peak torque of 90nm, available at 3,500rpm. While that may sound paltry to some, it’s important to note that the Celerio only weighs 835kgs, so while performance will not rival a warm hatch, it is more than adequate. Expect 0-100kph in around 14 seconds and a top speed of 155kph.

While those figures will hardly have you raising an eyebrow in excitement, we need to be mindful that this is a city car after all. A car that will spend more time stuck in the gridlock that is Johannesburg, rather than blitzing up Franschhoek Pass. However, if there is a critical area in which the motor excels, it is fuel economy. With the 35 litre fuel tank filled to the brim, the little Celerio will comfortably cruise for over 750kms. To put this into perspective, that equates to an incredible average fuel consumption of just 4.7 litres per 100kms.

The exterior of the Celerio has been gifted a fresher front-end, complete with a redesigned front bumper, larger recesses for the fog lights, and a blacked-out grille that is now dominated by a large chromed Suzuki emblem. The rear bumper has also gone under the knife and the fresher Celerio is complimented by new tail lights and redesigned wheel covers. As before, the GL specification level is distinguishable from outside by the colour coded mirrors and door handles and by the addition of chrome accents in the front grille. Ground clearance is also set at a higher-than-average 165mm, meaning beginner drivers could, in theory, trundle over kerbs without scraping the side sills or undercarriage.

As for the interior, a tachometer has also been added to the instrument cluster and the dash features a two-tone colour design that compliments a new cloth upholstery. Thanks to its generous 2.4 metre long wheelbase, the interior is surprisingly spacious and roomy, with reasonable legroom for rear passengers. Loading space is decent for a car of this size, but drop the rear seats and total luggage space expands from 235 litres to a rather cavernous 707 litres.

Much like in other Suzuki model ranges, the entry-level GA specification Celerio is only available with a manual transmission. It features a raft of standard equipment ranging from an air-conditioner, two airbags, power steering, an on-board computer, cup holders, a rear window wiper, daytime running lights, and cloth upholstery. In terms of safety, there are ISOFIX seat mounting points at the rear, as well as ABS and EBD.

The GL specification though, is available with a choice of either a manual or automatic transmission, and builds on the spec levels of the GA, but gains steering column adjustment, a multi-function steering wheel, an ambient temperature display, Bluetooth, Aux-in as well as a USB port, remote central locking, front and rear electric windows, electric side mirrors, front fog lights, and a split rear seat. And as with other Suzuki models, Suzuki South Africa offers an extensive list of OEM-approved accessories ranging from sporty fender flares, to roof boxes, to boot spoilers to alloy wheels.

Buy a new or used Suzuki Celerio at a great price.
We put you back in control, make a single request and get up to 3 quotes from dealers nationally.
Coming soon

5  things you need to know about the new Suzuki Celerio