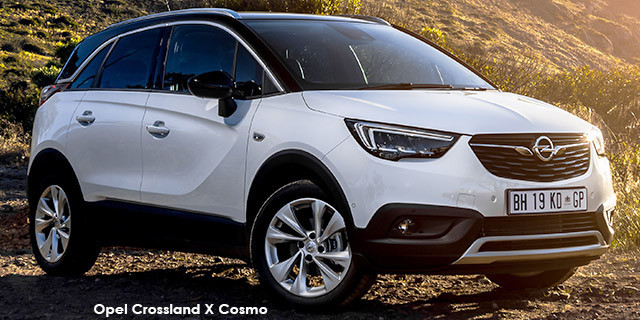 Remember the Opel Meriva from a few years back? That cute little compact MPV with the nifty rear-hinged rear doors? Those Flexdoors were indeed a very cool party trick. But even though the Meriva lasted two generations, demand for vehicles evolves according to the customers’ needs, and Opel opted to reinvent their MPV offering into something far more modern and versatile.

Times change, and evolution happens. After being on the market for 14 years, Opel retired the Meriva and launched the all-new Crossland X. This SUV-styled crossover is the smallest of its X-branded siblings, the Grandland X and Mokka X; and rides on a modified platform it shares with two vehicles under the PSA banner, the Citroën C3 Aircross and the Peugeot 2008.

Naturally any self-respecting crossover these days has all the paraphernalia of ‘urban toughness’ and Crossland X is no different. The front, sides and rear bear all the cues of Opel’s new design language punctuated with grey plastic cladding and a prominent skid plate at the front and rear. There is a distinctive bi-colour option that adds a different coloured roof, much like the Opel Adam, while the sporty 17-inch wheels further emphasizes its modern and fresh appeal.

If you have been in any modern-day Opel, then this cabin layout – specifically the dash – will be very familiar. Taking centre stage on the dash is a large 7-inch infotainment touchscreen system that incorporates Radio R Navi 5.0 IntelliLink with Apple Carplay and Android Auto tech, and is angled towards the driver, making it easy-to-use once on the move. Seats in the Cosmo are a mix of leather and cloth, and proved supportive and comfortable on extended drives. The rear seats boast a sliding function allowing them to be moved up to 150 mm fore and aft.

Compared to the Meriva it replaces, the Crossland X is 76mm shorter at 4,212mm, 47mm narrower at 1,765mm, and 10mm shorter at 1,605mm. Its wheelbase is also slightly shorter than its predecessor, measuring 2,605mm long – roughly 39mm shorter. Dimensions aside, the Crossland X is actually very spacious for the average family. The driving position is raised, much like in all SUVs, and gives the driver a great view of his/her surroundings. Aside from loads of storage space around the cabin, loading space at the rear is certainly plentiful – when the rear seats are up, the Crossland X can hold 410 litres of space, and with the seats folded down, it expands to a gargantuan 1,255 litres.

There are two motor options for the Crossland X buyer. The entry-level model comes with a naturally aspirated 1.2-litre 3-cylinder petrol engine that produces 60kw and 118nm. The remaining four derivatives all use the same turbocharged 1.2-litre 3-cylinder petrol motor, with outputs of 81kw and 205nm. Its crazy economical though, with the loaded flagship model averaging just 5.4L/100kms, equating to over 800kms on a full tank of unleaded.

And with the crossover tipping the scales at just under 1.3 tons, it is hardly a ball of fire when it comes to performance. Expect 0-100kph to come up in a shade over 10 seconds, with the Crossland X labouring to its maximum speed of 188kph. Every derivative in the range – except the base model - has a choice of two transmissions – a five-speed manual or a six-speed automatic. Despite a commendable 124mm of ground clearance, the Crossland X is just a front-wheel drive, so attempting even a beginner off-road trail is likely to end in tears.

Out on the road, the punchy Crossland X offers a fuss-free driving experience. Because of its SUV-seating position, you have a commanding view of the road ahead, and this really helps when navigating spaces where manoeuvrability is key. This is further helped by the light and accurate steering, although this does blight the drive ever so slightly when you’re on a highway. That aside, the Crossland X is so spacious and comfortable, you will hardly pay attention to its quick steering once you’re on the road. Our test unit was fitted with a six-speed automatic, and we felt that it reacted a little slow to gear changes, however, this would easily be remedied by selecting the five-speed manual transmission if you prefer a more ‘hands-on’ driving experience.

Buy a new or used Opel Crossland X at a great price.
We put you back in control, make a single request and get up to 3 quotes from dealers nationally.
Coming soon