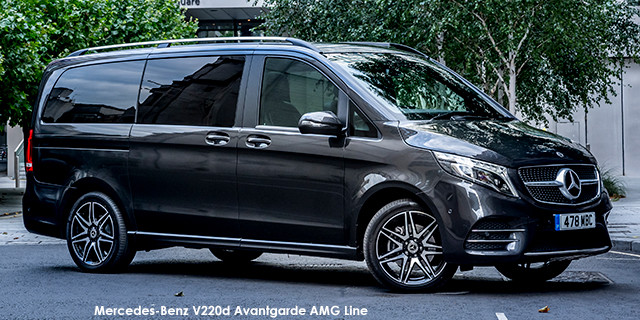 Mercedes-Benz recently announced that their Mercedes-Benz V-Class luxury MPV would be receiving a facelift, and I headed down to Cape Town to sample the new van as soon as it arrived in South Africa.

The facelift brings the majority of changes to the design of the V-Class. Outside, there is a new diamond grille, taken straight from the CLA-Class, that sits above a wider, more striking front bumper with a lower air-intake. These parts are even more visually enticing on the higher spec AMG line, which includes new wheel design options. Customers can also choose between a few new colours, such as Hyacinthe Red, that are added to the existing palette on the luxury van. The interior features optional creature comforts such as electrically adjustable leather seats, with heating and cooling function, as well as a premium Burmeister sound system, a massive panoramic sunroof and electrically operated sliding doors.

In terms of performance changes, it seems that not much has changed. Mercedes-Benz Vans decided to keep the 7G-tronic transmission of the predecessor V-Class instead of introducing the new 9G-Tronic box that’s available to European markets. South Africa receives three model derivatives – the 100kW and 330Nm entry-level V200d, the mid-range 120kW and 380Nm V220d and the top-of-the-range 140kW and 440Nm V250d, all powered by a turbodiesel 2.1-litre engine. The V300d 2.0-litre will not be making a local appearance.

Now let’s talk about how it drives. I was happy to get my hands on a Mercedes-Benz V250d albeit not being an AMG-Line model. I spent the first moments of the road test as a passenger in the back seat. My first impression was not great. The seats felt comfortable enough, the windows were big, the sunroof was bigger and there was a lot of head and leg room, but that’s all there was, leaving me feeling underwhelmed. Jumping into a V-Class, you expect a level of luxury that you can’t get in a normal car, but here I was just sitting in a regular seat with a pair of adjustable arm-rests. I also noticed quite a bit of road noise in the cabin. I decided to fiddle around because surely this was not all this vehicle had to offer. To my surprise I stumbled upon the rear tray-table which, after a few minutes of pulling levers, adjusting seats and pulling out pieces, opened up and made the back seats a little more exciting.

I hopped into the driver’s seat and was underwhelmed yet again, especially with Mercedes’ decision to not include the MBUX interface and digital dashboard to the new model. The feature that disappointed me the most was that I had to physically insert and turn a key to start this million-rand-plus car. The last annoyance I had was with the navigation system, which proved to be inaccurate for most of the launch day. Aside from these issues, the V-Class offers a comfortable driving position, smooth power delivery and a steering that’s smooth as butter. These positive features will most definitely shine during long road trips and cross-country family holidays. Visibility was good and the 360-degree camera really made navigating tight spots much easier.

Overall I would say that at this price point, you might as well fork out the premium for the top-spec V250d AMG Line with all of the bells and whistles as opposed to the alternative of settling for an average spec that doesn’t really live up to the luxury expected from the V-Class.

Buy a new or used Mercedes-Benz V-Class at a great price.
We put you back in control, make a single request and get up to 3 quotes from dealers nationally.
Coming soon