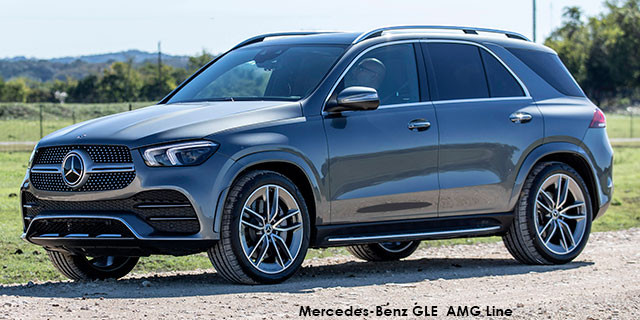 "In 1997 Mercedes-Benz founded the premium SUV segment with the launch of the M-Class. Since then, more than two million customers have decided in favour of the off-roader worldwide. The GLE introduces the new control concept with innovative driving assistants, a new engine range and significantly more space. The new GLE is set to continue this success story throughout." Says Johannes Fritz, Co-CEO and Executive Director Mercedes-Benz Cars South Africa. It’s clear that the Mercedes GLE-Class is important to the German manufacturer, so we headed to Zwartkops raceway to take it for a drive to see what it’s like.

The design of the Mercedes-Benz GLE has undergone the usual ‘new-model’ improvements. It’s lower, wider and longer than before. "The GLE exhibits iconic Mercedes-Benz design while remaining true to its character as an off-roader," says Selvin Govender, Marketing Director for Mercedes-Benz Cars South Africa. "With its design idiom it perfectly embodies our design philosophy of sensual purity, thus representing modern luxury. The interior derives its fascination from the contrast between the luxurious and elegant design and the digital high-tech of our MBUX system."

At launch, the GLE SUV is available in two trims, namely the Standard line and the AMG line. The standard line features chrome details and LED headlights as standard while the AMG line takes the sporty appeal up a level by adding a diamond radiator grille, larger air inlets and painted wheel arches to the mix. Customers can choose from a range of different wheel options, from sensible 18-inch alloys all the way up to 22-inch alloys. The new GLE also boasts a more aerodynamic design with the lowest drag co-efficient of its segment, improving things like handling and fuel consumption.

The Mercedes-Benz GLE will only be sold as a long wheelbase variant in South Africa. The additional 80mm in length provides occupants with even more headroom and legroom than before. Rear passenger luxury can be taken a step further with the optionally available electrically adjustable seats, complete with a 40:20:40 split. The improved length also permits the availability of a third row of seats, ideally targeted toward buyers with small children. The new GLE is also practical in terms of luggage capacity, offering a generous 825-litre capacity that can go up all the way to 2055-litres when the seats are folded down.

Up front the driver is treated to the latest iteration of Mercedes-Benz User Experience, or MBUX, which is equipped as standard across the range along with two 12.3-inch widescreen displays that act as the central infotainment display and instrument cluster. The MBUX interface can be controlled through touch, gesture and voice commands which are recognised and learned by the systems artificial intelligence. In addition to this, the system can also be controlled from the touch pad in the centre console as well as the touch pads on the fourth-generation Mercedes-Benz multifunction steering wheel. The 64-colour ambient lighting is standard across the range, while the AMG line includes sports seats, sports paddles and AMG floor mats.

The Mercedes-Benz GLE features more technology and driving aids than ever before. Safety features like Active Brake Assist get acoustic and visual signals, as well as a new Trailer Manoeuvre Assist feature that uses sensors and the 360-degree camera to reduce the complexity of towing things. The new multibeam LED headlights are made up of 84 adjustable LED’s that turn with the vehicle to improve visibility. The biggest improvements are found in the off-road tech, which features a differential lock, a low-range gearbox and a dedicated off-road theme that changes the MBUX displays to communicate off-roading information such as tilt-angles and a G-force meter to the driver.

Our launch drive was split into three components. The first was an off-road obstacle course that tested the GLE’s off-road capability at slower speeds. The GLE handled these obstacles with graceful confidence, easing through the course. The off-road technology could really be felt, and features like the 360-degree camera ensured confidence as we pushed the SUV to its limits. The next section was a dynamic off-road circuit that demonstrated how the GLE reacts to situations such as harsh braking, both on and off road, as well as a series of high speed off-road sections. I found the GLE to be very dynamic despite its orientation towards comfort. I did, however, notice that after a few hard laps the GLE felt like it was struggling, but in its defence, most drivers will hardly ever put the GLE into this scenario so it’s still a winner.

The last section was an extended drive on normal tar roads. We headed from Zwartkops to the Cradle and looped back to the track. It performed exceptionally well. The GLE 300d felt a bit low on power but the 400d solved that problem. The GLE 450 model felt very quick, but I found it to be unnecessary when compared to the similarly performing GLE 400d, especially with the lower consumption of the diesel model. After driving all three models, my pick at the end of the day was the Mercedes-Benz GLE 400d, trumping the other models with its great balance of performance and efficiency.

Buy a new or used Mercedes-Benz GLE at a great price.
We put you back in control, make a single request and get up to 3 quotes from dealers nationally.
Coming soon