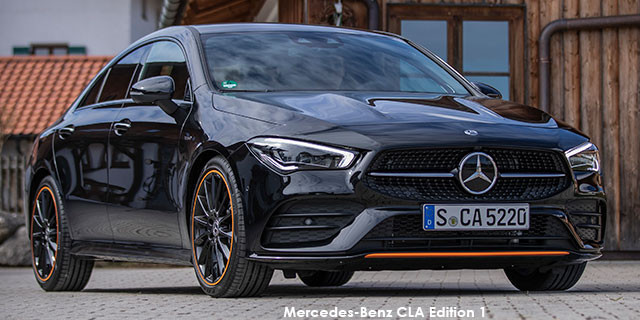 Mercedes’ entry-level CLA currently retails for R624 200. The model in question is the CLA 200, and you would be mistaken for thinking it has a 2.0-litre giving it shove. Instead, there is 1.3-litre turbocharged four-cylinder dubbed the M282 and was jointly developed with Renault.

But this is hardly news. It has been public knowledge for a long time that Mercedes and Renault have worked closely together, not only on engines but models too, for example, the X-Class and the Renault Alaskan. But engine capacity aside, the 1.3T in the CLA 200 produces 120kw and 250nm. Unlike the Mercedes-AMG variants of the CLA, the 200 is front-wheel drive, with power sent to those wheels via a 7G-DCT transmission.

Its performance is adequate, capable of the benchmark 0-100kph sprint in 8.2 seconds, and will reach a top speed of 229kph, while it’s claimed to use just 5.5 litres per 100kms. It recent years, Mercedes has been quite optimistic about its fuel economy claims, so with the CLA 200, we decided to put their claims to the test. During our test, we racked up some 1400kms, and through some careful economical driving, we achieved an incredible 4.7 litres per 100kms. 120kw might not sound a lot, but there is always enough power on tap, should the need for some overtaking or exuberant driving arise.

Aesthetically, the new CLA strikes a sparkling resemblance to the larger CLS, retaining its unique frameless four-door coupe shape, and is 48mm longer, 53mm wider, and 2mm lower than its predecessor. Compared to the A-Class Sedan, it features flatter headlights, a central star on a diamond radiator grille, as well as a low slung bonnet with twin power bulges. At the rear, the design is very different from the original, as it now has two-piece, narrow taillights and the license plate is housed in the bumper which conspires to give the rear of the CLA an especially wide look.

Compared to its predecessor, the new CLA boasts not only a lower center of gravity but also a wider track (an extra 63mm at the front and 55mm more at the rear), two very important features which no doubt give the CLA a sportier drive than the similar A200 Sedan we also tested. Further aiding its sportier driving characteristics is the fact that the CLA (all models) features a multilink rear suspension, whereas only higher-spec variants of the A-Class use this setup.

Much like its A-Class sibling, it gains a fair amount of kit as standard. It has Active Brake Assist, cruise control, a tyre-pressure monitoring system, and LED daytime running lamps. And naturally, there is a host of active and passive safety features. There is also Dynamic Select, which is a system that offers different drive programs with preset options for the engine, transmission, chassis, and steering, for instance. With the "Sport" mode you can drive decidedly dynamically, and with the default program "Comfort" very harmoniously. "ECO", on the other hand, places the emphasis on maximum efficiency and saves fuel and money.

Despite riding on the same platform as the A200 Sedan, and using the same drivetrain, one has to ask, ‘Why would someone choose the more expensive CLA 200 over the A200? The answer is quite simple. Despite being similar, they both compete in different segments. The A200 adopts a more practical approach to motoring with its traditional sedan body shape, whereas the CLA200 has a far more high-performance look to it, as a result, is aimed at those wanting a sportier drive. Drive aside, the silhouette of the CLA200 screams ‘sporty’, despite compromising on boot capacity and having a little less rear headroom than the A200.

The Hungarian-built CLA200 meanwhile, finds a direct rival in BMW’s first-ever 2 Series Gran Coupe. The 1.5-turbo 3-cylinder-engined 218i Gran Coupe is significantly cheaper at R520 520, but while it does have a refreshing design, its looks are largely polarizing, and it does have less power (103kw/220nm) than the Benz. The Mercedes-Benz CLA 200 is priced from R624 200, and includes a 5-year/100 000km maintenance plan, and a 2-year/ unlimited km warranty.

Buy a new or used Mercedes-Benz CLA at a great price.
We put you back in control, make a single request and get up to 3 quotes from dealers nationally.
Coming soon