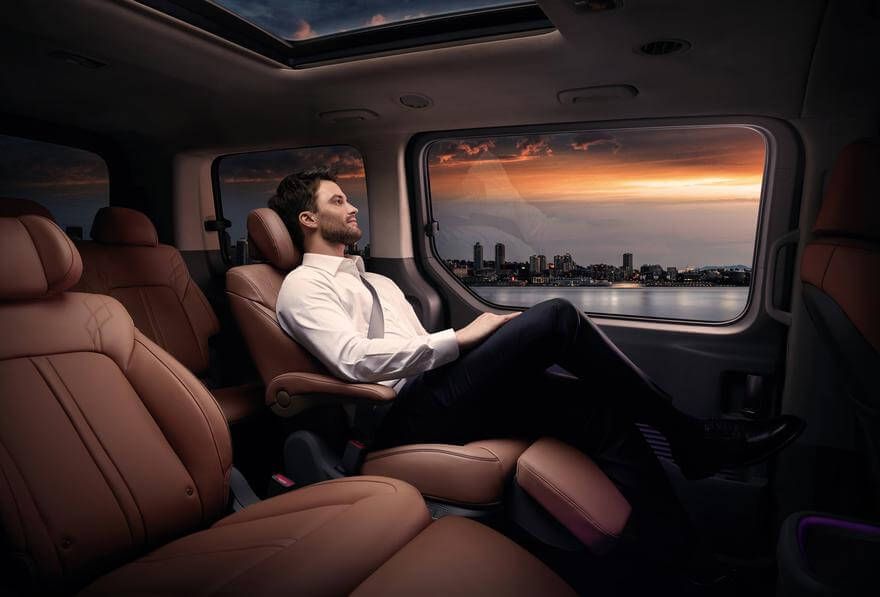 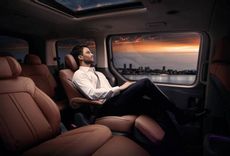 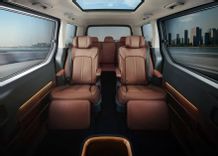 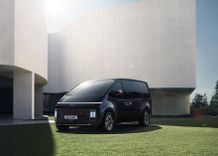 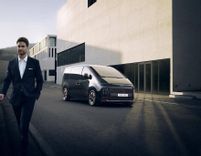 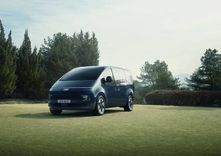 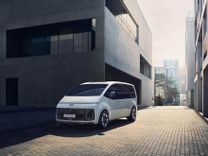 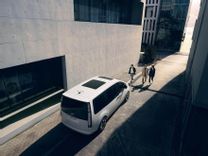 It’s no secret that Hyundai has been working on establishing its futuristic STARIA and now after much anticipation has finally revealed its line-up through a digital world premiere, establishing a model for its future purpose-built vehicles (PBVs). The Staria Premium model has adopted a futuristic spaceship design and will feature an exclusive tinted brass chrome treatment, applied to the Hyundai emblem, grille, headlamp bezels, front and rear bumpers, wheels, side mirrors and door handles to emphasize the vehicle’s premium and modern look. The beltlines are lowered, with the panoramic side windows improve overall visibility and create a feeling of openness. In terms of colour choices, the STARIA will come available in in eight exterior colours: Abyss Black Pearl, Creamy White, Graphite Gray Metallic, Moonlight Blue Pearl, Shimmering Silver Metallic, Dynamic Yellow, Olivine Gray Metallic and Gaia Brown Pearl.

Inside, the driver’s seat features a futuristic high-tech look with an advanced 10,25-inch front display screen, touch-based center fascia, and a button-type electronic shift lever. The digital cluster is located on top of the dashboard for an unobstructed driver view. There is also storage space is on top of the overhead console, bottom of the cluster, and top and bottom of the center fascia. Both the driver and passengers also have access to a center console equipped with cup holders, USB ports, and additional storage space. Before we get to the rest of the features, it's important to remember that the Staria will be available in either a 7-seater or 9-seater. The 7-seat Premium model will come equipped with Premium Relaxation Seats in the second row that recline electronically while the 9-seater Premium model’s individual seats in the second row can swivel 180 degrees to face passengers in the third row. The Staria’s interior will come available in these colours: black, black-and-beige two-tone, black-and-blue two-tone. While the Premium variant offers additional options of grey-and-brown two-tone as well as grey-and-light-Grey two-tone,

In terms of the engine, the Staria that will be offered in South Africa will get a 2.2-liter VGT turbodiesel engine, the same source of power used in the new Santa Fe which is to be launched locally this month. The diesel engine is newly improved and mated in the Staria with an eight-speed automatic transmission. Its high-efficiency, air-cooled turbocharger has an improved compressor and turbine wheel performance for better low speed torque performance. Hyundai Motor optimized each powertrain for low noise, vibration, and harshness (NVH), better shift sensation for high torque performance, and improved acceleration. Mechanical upgrades also resulted in improved ride comfort thanks to the application of a multi-link suspension at the rear axle.

In terms of safety, the Staria will offer an option to add as many as six airbags, with all seats coming with three-point seat belts and headrests. Safety is further boosted by smart options such as Forward Collision-Avoidance Assist (FCA) and Blind-Spot Collision-Avoidance Assist (BCA). Other safety features will include Wireless Module Seat Belt Reminder (WM-SBR), which is the world’s first seat belt reminder system using wireless communications technology. In a situation where a passenger attempts to open the power sliding door while a rear-side vehicle is passing by, Safe Exit Assist (SEA) prevents the door from opening. The Staria will also come with Hyundai’s smart infotainment system which is equipped with a wide-angle camera that enables the driver and front passenger to view rear passengers in the back seat on the display screen.

In terms of pricing, Hyundai has yet to confirm these details as well as when it will be launched in South Africa.