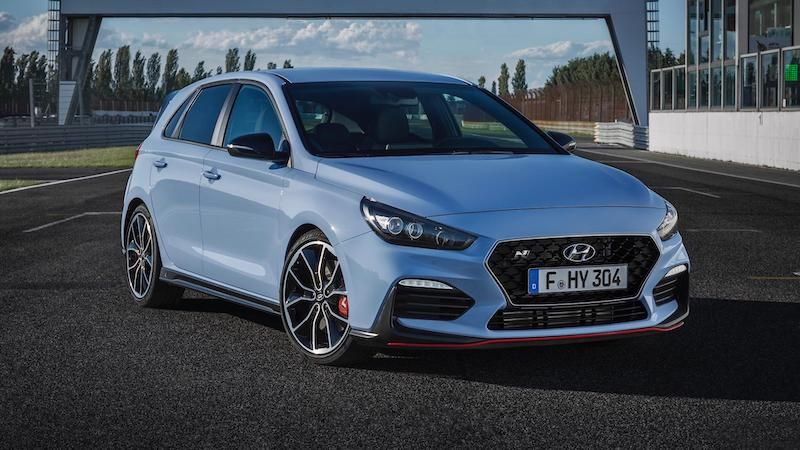 Hyundai’s epic i30 N is on its way to South Africa. Much like sister company Kia did with the Stinger, Hyundai South Africa will reportedly bring in 50 units of the hot hatch.

The hot hatch will be front wheel drive and powered by a 2.0-litre turbo four cylinder motor, which is actually a very heavily modified Sonata engine. But there will be two states of tune, while both are available in a 6-speed manual configuration only.

The “entry-level” model tips the scales at around 1,450kgs and has 184kw and 352nm. There’s also 18” wheels with Michelin tyres and an open differential. The “Performance package” model meanwhile, boasts 202kw and 352nm. There’s bigger brakes, grippier seats, an electronically-locking LSD and 19” wheels wrapped in stickier Pirelli P-Zero N tyres. The 184kw model hits 100kph from standstill in 6.4 seconds versus 6.2 seconds for the 202kw variant. That said, South Africa is likely to only get the 202kw variant.

Mounted on the steering wheel is a put that can activate (and deactivate) rev matching. But that’s not the only impressive tech on this car. There’s buttons on the steering that allow you select a variety of modes : ECO, Normal, Sport, N mode and N custom, with each varying and adjusting the active damper rates, throttle response, steering wheel, ESP calibration, the LSD, as well as the bi-modal exhaust system. There’s even coloured shift lights in the instrument binnacle.

There’s launch control too. It’s a little gimmicky, but to provide the occupants of the i30 N with a real high-performance experience, a sporty engine sound is produced by the Electronic Sound Generator in the body panel. In the cabin, at the base of the windscreen, is an engine sound generator which provides some extra acoustic drama to match the mood of the driver.

The interior is focused on connecting the driver with the car at all touch points. The concept is dedicated to the people who truly love cars. The i30 N features uniquely designed high-performance sport seats with significant lumbar support.

At the front, the i30 N also maintains its sporty, aggressive appearance through the black bezel of the headlamps. At the rear, the triangular third brake light in the new glossy black spoiler and the double muffler exhaust underline the eye-catching look of the sports hatchback.

Because of Hyundai Motor's motor sport heritage, the i30 N comes with the exclusive Performance Blue paint - a colour introduced at the beginning of Hyundai's WRC engagement and has represented the N line-up ever since. Altogether, customers can choose from six different exterior colours. Besides Performance Blue, the range includes Clean Slate, Polar White, Micron Grey and Phantom Black or Engine Red.

The car is certainly track-honed. Hyundai did almost all their endurance and handling testing at the Nurburgring, lapping the track between 420 to 480 times in both dry and wet conditions, simulating up to 180,000 km of severe driving -the equivalent of a normal vehicle's lifecycle - in just four weeks.