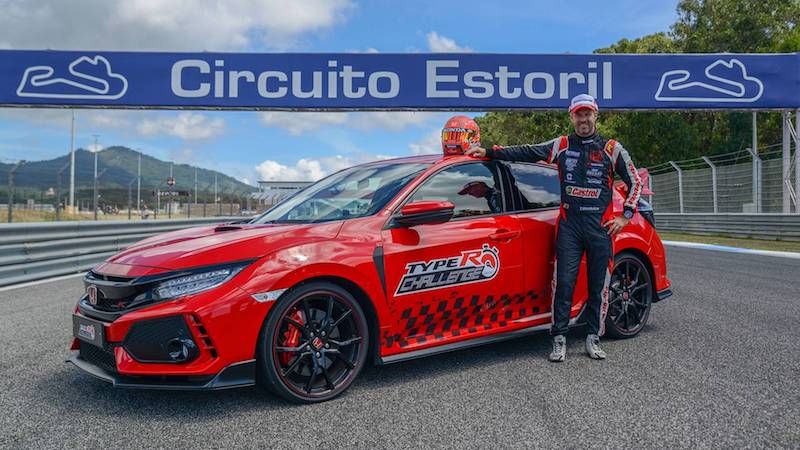 The Honda Civic Type R is continuing its domination at European race tracks, and racked up another lap record, this time at Estoril in Portugal.

Following records at the Nürburgring, Magny-Cours, Silverstone, and Spa-Francorchamps, Honda UK took a production spec FK8 Type-R, and planted Honda WTCR driver Tiago Monteiro in the driver's seat, who proceeded to set a new FWD lap record at Estoril, with a time of 2:01.84 - beating the 228kw FK2's time by 3 seconds.

The iconic Estoril track is 4.2km long with two hairpins, a difficult chicane and a very long main straight, which means drivers experience an unusually broad range of speeds over one lap. It therefore rewards cars with a great breadth of ability that combine fast acceleration with exceptional handling. Interestingly, the 235kw FK8 was only 6 seconds off the Mclaren F1's pace at the 4.2km long track.

Speaking about the benchmark time, Tiago Monteiro said: “We came here with a goal to beat the existing lap record set by the previous car but you can never take anything for granted – I mean it’s a lap record so it’s no easy feat. You have to have supreme confidence in the car to attack around Estoril, and the new Type R is just so powerful, smooth and confidence-inspiring. We beat the lap record, smashed the record actually.”

The next target on the Type-R's radar is a lap record at the Hungaroring, where former F1 World Champion and Honda ambassador, Jenson Button is expected to take the wheel. The time to beat is a 2:10.85, set by the FK2 Type-R - a mere 2 seconds slower than the Ferrari F12 Berlinetta.