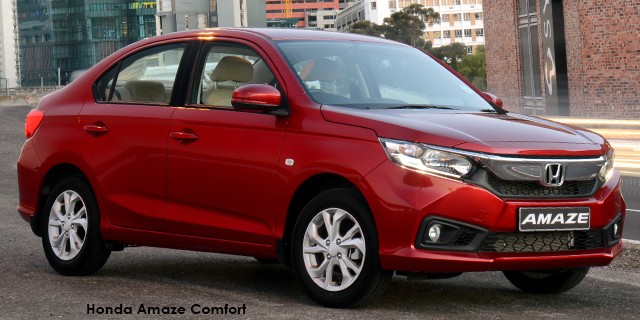 When Honda first launched the Brio hatchback and Brio Amaze sedan back in 2012, a lot of people didn’t know what to make of it. Sure it carried the legendary ‘H’ up front, and that meant ‘quality’, but this was the first time that Honda introduced a real budget friendly car in South Africa.

Fast forward a couple of years later, and it’s fair to say that Honda South Africa made the right decision by launching their Brio range locally. In a budget conscious South Africa, the Brio and Brio Amaze went onto become hugely popular, and resultantly, sales revelations.

And while the original Brio range were decent cars, there were still aspects that didn’t sit right with Saffas. Honda set about setting this right with their more upmarket second-generation Amaze that debuted locally late last year. Incidentally, the Brio hatch has been dropped from the line-up citing poor sales in India; and the Amaze, which now drops the Brio nameplate, stands tall as the sole model available.

As before, the Amaze competes in the sub-B segment sedan market, and goes up against the newly renamed Suzuki Dzire, Ford Figo and Toyota Etios sedans. Honda SA is offering the Amaze in two specification levels – Trend and Comfort. There are three models on offer though, all with the same motor, with the Comfort being available in both manual and a new-generation Constantly Variable Transmission (CVT).

The sole motor on offer is a naturally-aspirated 1.2-litre four-cylinder i-VTEC unit, and produces a modest 66kw and 110nm. This motor actually soldiers on from the first-generation Amaze to save costs. With a kerb weight of just under 950kg, the Amaze is able to deliver both entertaining performance, and frugal fuel economy. Honda claims manual-equipped models can accelerate from 0-100kph in 12.3 seconds, while the CVT version requires a pedestrian 13.5 seconds to reach the benchmark. You aren’t going to break any land speed records either, as all derivatives will max out at 160kph.

With the price of fuel reaching record highs, vehicles like the Amaze are just the ticket for cash strapped South Africans. The Amaze impresses with incredible frugality, with the manual sipping unleaded at a rate of just 5.6L/100kms, while the CVT is only slightly thirstier at 5.7L/100kms. This means that even with a tiny 35-litre fuel tank, you are likely to achieve over 600kms on a single tank. What is more interesting is that these figures puts it in the running for the most fuel efficient vehicle in South Africa, beating out many diesel and hybrid vehicles in the process.

While it would be fair to call the original Brio Amaze sedan’s design somewhat ‘quirky’, the new model sports a more mature look – almost Honda Jazz-like. The new Amaze sports a more elongated side profile, with a boxy front end and a chrome grill. The most noticeable change is out back, as the Amaze now gains C-shaped styled taillights similar in design to those seen on the Civic.

In terms of size, the Amaze gains an additional 5mm of length to 3,995mm, with its wheelbase growing by 65mm to 2,470mm. It also stands 15mm wider at 1,695mm, whilst the compact sedan now offers an additional 5mm of ground clearance at 170mm. And thanks to the increase in length and wheelbase, this means a more spacious interior than before, and more luggage space, which has increased by 20 litres to a class-leading 420 litres. And despite being larger, it rides on a new platform, so it’s actually lighter than the model it replaces.

The interior of the Amaze has been thoroughly redesigned and looks very modern. Smart cloth upholstery is used to trim the contoured front seats and rear bench seat. And if those beige cloth seats doesn’t suit your taste, Honda will fit a set of genuine Honda synthetic leather seat covers as a no-cost option. The driver focused dashboard is characterised by gloss piano black detailing, which no doubt gives it a somewhat sophisticated ambience, even if it is prone to finger prints. The overall interior design of the Amaze is actually very similar to other current Honda models, whereas with the original Brio Amaze, it was as if it was designed almost independently of Honda.

In terms of specification, the entry-level 1.2 Trend is priced at R179 900, and features 15-inch alloy wheels, a smart cloth interior, a tilt-adjustable multi-function steering wheel, and a four-speaker sound system as standard. This audio system has Bluetooth connectivity and MP3 functionality. The Trend variant is also only available with a 5-speed manual transmission. Safety is also good at its price point, with all derivatives of the Amaze equipped with a driver airbag and a front passenger airbag. There is also ABS and EBD as standard, IsoFix child seat anchors, as well as a third brake light.

The range-topping 1.2 Comfort is available with either a 5-speed manual transmission or a CVT, and priced at R193 900 and R208 900 respectively. It is differentiated from the Trend derivative by its colour-coded electric side mirrors and door handles, and by its recessed fog lights. It also gains an automatic air-conditioning system, as well as automatic door locking once the vehicle gets on its way. Expect the same sound system and interior furnishings as the Trend. All variants come standard with a five-year/200 000km warranty and two-year/30 000km service plan.

Buy a new or used Honda Amaze at a great price.
We put you back in control, make a single request and get up to 3 quotes from dealers nationally.
Coming soon