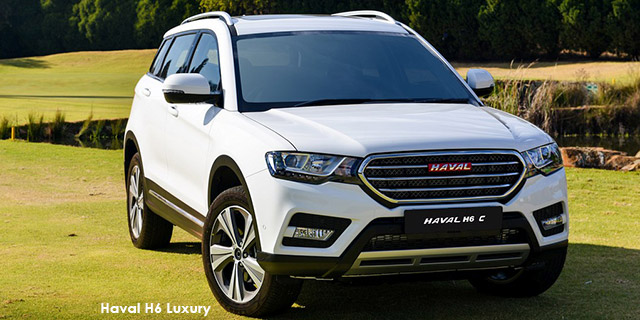 Slowly but surely the Chinese have been chipping away, improving their Haval range into something that is truly competitive in the burgeoning SUV segment in South Africa. And their latest offering, the H6 C is arguably their best offering to date.

Whilst not as large as the full-size H9 SUV, the H6 C fills the void between the regular H6 and the behemoth-sized H9, meaning it plays in an extremely competitive segment, dominated by from very experienced players – notably the Honda CR-V, the Subaru Forester, the Volkswagen Tiguan, the Toyota RAV4 and the Hyundai Tucson to name just a few. As you can see, H6 C would need to be something pretty special to steal sales away from this lot.

But! It can and does. The reality is that the H6 C has a lot going for it, aside from its exceptional price that sees the range start at R329 000 and top out at R399 900. Immediately, it has a massive advantage over its more expensive rivals. It ships standard with a 5-year/100 000km warranty and a 5-year/60 000km service, meaning Haval is standing firmly behind their product, and charging head-on into the competition.

One way to keep the price down is by simplifying the range, and Haval has managed to achieve this by offering a single engine derivate, a turbocharged 2.0-litre four-cylinder petrol engine. The engine outputs are quite impressive, boasting 140kw and peak torque of 310nm available between 2,000 and 3,600rpm. One area where they do offer a choice is with transmissions – there is either a six-speed manual on offer or a Getrag six-speed dual-clutch transmission.

We tested the automatic transmission, and it was smooth and quiet, unlike some of its rivals CVTs, while the engine surge was termed ‘satisfactory’, with very linear power delivery. Thanks to forced induction, there is some good midrange shove, accompanied by some old-school turbo whoooossh as it builds revs. However, it labours to move the 1.7-ton bulk that is the H6 C, from 0 to 100kph in 9 seconds, which is still credible for an SUV mind you. Fuel consumption is a tad on the thirsty side, as we only managed to achieve the best average fuel consumption of 10.9L per 100kms, which equated to just over 500kms on a full tank of 61 litres of unleaded.

And while the H6 C’s drivetrain is adequate, there is another area where it shines, and that is specification. Despite its modest pricing, the sporty Haval is as they say, “loaded”. Our flagship ‘Luxury’ derivative featured everything from 8-way electrically adjustable seats, to dual-zone climate control, to variable mood lighting, a reverse camera and side camera, red puddle lamps, and a large 8-inch touchscreen infotainment system with Bluetooth integration, but without navigation. Safety is up there with the best of them and includes six airbags, a tyre pressure monitor, LED daytime running lights, ABS, EBD, brake assist and stability control, keyless entry, and front and rear PDC.

The H6 C is certainly an attractively styled vehicle. It incorporates many contemporary design traits pioneered by other automakers, into one good-looking package. Haval’s designers mixed a chrome grille with a satin chrome skid plate up front, while the rear gets a skid-plate reminiscent of that seen on the new Range Rover Velar. There are LED lights, front and rear; as well as a rear mounted roof spoiler that adds to its sporty utility credentials. One thing we liked was the rising shoulder line that gives it an Audi Q2-ish side profile. The exterior is populated by chrome strips throughout, which contrast nicely with the Luxury spec’s standard 19-inch wheels. Another nifty additional is the standard fitment of a massive panoramic sunroof on the flagship variant, meaning all of this comes on a vehicle that comes in under the R400K barrier.

The interior is equally charming, and build quality is far improved from earlier Haval and GWM models. That said, while the cabin does look smart, it’s probably best not to scrutinize things closer. The upholstery is synthetic leather – much like Mercedes’ Artico artificial leather – complimented by some faux carbon trim on the dash. There are some annoying hard plastics though, and we feel in a vehicle of this price range, this should be kept to a bare minimum because ultimately, the H6 C is playing in a somewhat ‘premium’ segment of the market now.

Ride quality – despite riding on 19-inch wheels – is actually really decent. On everyday roads it is great, but with any SUV shod with large wheels, it can become a little choppy on bumpy road surfaces. When you do push on, it remains firmly planted with little body roll, but never overly bouncy. This is thanks to an independent MacPherson strut suspension combined with double wishbone independent suspension at the rear. The heavily-weighted steering works nicely when the H6 C is up and running, but at the same time, the steering can be a little heavy at parking speeds. There’s also a choice of driving modes, including a Sport setting, should you wish to try to extract the most from its 2.0T mill. As for general on-road refinement, the cabin is well insulated from wind, road, and mechanical noise.

Haval has made some major advances in the last couple of years. They have positioned their brand nicely – despite South Africans being some a brand biased lot – and are making inroads in the market quicker than ever. But unlike their previous offerings, the H6 C is not exactly cheap. It’s a solid offering no doubt, but you could spend R50K more to get a more established, better-polished rival. However, it’s important to note that, R400K buys you the flagship H6 C variant, whereas that money will buy you an entry-level variant of its chief rivals. But these days, with the Rand doing all sorts of crazy things, everyone wants their precious Rands to go as far as possible, and bias aside, this is where the H6 C comes into play. It’s a genuinely decent offering, with a huge amount of standard kit. If you can look past some minor niggles, you will no doubt be pleased with your purchase. After all, the Chinese are the next big thing.

Buy a new or used Haval H6 C at a great price.
We put you back in control, make a single request and get up to 3 quotes from dealers nationally.
Coming soon