UP THE MUSCLE - Ford Focus ST 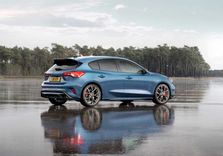 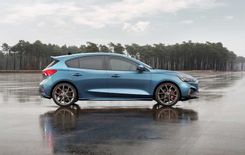 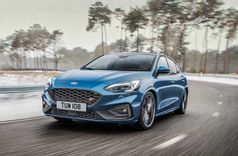 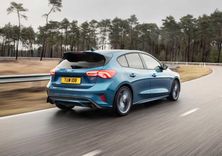 Ford has finally revealed its hot new ST, but is it coming to South Africa?

After what has seemed like an eternity, Ford has officially unveiled its fourth-generation Focus ST. While the hot hatch will feature much of the ground-breaking technology seen in the regular Focus, the big talking points here is what lurks under its shapely silhouette.

For starters, Ford has binned the old turbocharged 2.0-litre four-cylinder motor in favour of an all-aluminium 2.3-litre EcoBoost four-cylinder. Compared to its predecessor, this petrol engine features a low-inertia twin-scroll turbocharger, and produces 12 per cent more power and 17 per cent more torque than the Mk3 ST. Outputs now stand at 206kw and an impressive 42A0nm, available from as low as 3,000rpm. Ford has yet to release performance stats but say the new ST will do 0-100kph in “less than six seconds”.

Ford Performance says that the new ST's EcoBoost motor gains anti-lag technologies originally developed for the epic Ford GT supercar and the F-150 Raptor to ensure optimal power transfer when the vehicle is in Sport or Track mode. Anti‑lag keeps the throttle open when the driver lifts off the accelerator pedal, alleviating the reversal of air flow from the turbocharger to maintain compressor wheel speed and enabling boost pressure to build faster on demand.

There's also two transmissions on offer - a six-speed self-shifter and a 7-speed automatic. Ford has also fitted an electronic limited-slip differential as standard for the very first time on a front-wheel driven Ford. This Borg Warner-developed eLSD is faster to deploy and offers greater precision than a traditional mechanical LSD. Incorporated into the transmission, the system uses hydraulically activated clutches to limit the engine torque delivered to a wheel that has reduced traction on the road surface, and redistributes up to 100 per cent of available torque to the wheel with more traction to counteract wheel spin that can hamper acceleration through, and out of, corners.

There are also bigger performance brakes as standard. Front disc dimensions have grown to 330mm x 27mm and feature dual-piston callipers, while the rear discs now measure 302mm x 11mm. Ford verified the Focus ST’s braking performance by using the same demanding test procedures as they did when assessing the braking prowess of the Ford GT supercar, and achieved almost four-times the fade resistance performance of the previous generation Focus ST in testing.

There is an optional Performance Pack too. This expands on the standard three drive modes, and adds Track Drive modes that adjust the eLSD, CCD, EPAS, throttle mapping, automatic transmission shift scheduling, electronic stability control, electronic sound enhancement (ESE) and climate settings to suit the driving scenario. A dedicated “Sport” button on the flat-bottomed steering wheel gives direct access to Sport mode, and an additional “Mode” button allows drivers to quickly scroll through the drive mode options. There is also rev-matching technology from the Mustang that debuts on the ST as part of the Performance Pack.

In certain markets, the ST will also be available as a diesel. This model uses a 2.0-litre EcoBlue motor that produces 140kw and 400nm, and this model will feature torque vectoring instead of an electronic LSD. This diesel variant features a low-inertia variable geometry turbocharger; steel pistons for less expansion when hot; and an integrated intake system with innovative mirror-image porting for optimised combustion help to deliver a diesel powertrain that produces 10 per cent more power and more than twice as much torque as the 2.0‑litre Duratec ST petrol engine in the first generation Focus ST170.

The Golf GTI-rival is expected to go on sale in Europe around the middle of 2019. However, there has been no confirmation from Ford South Africa as to whether the ST will even make it to our shores. That said, Ford fans are hoping not to get overlooked as was the case with the latest Fiesta ST.