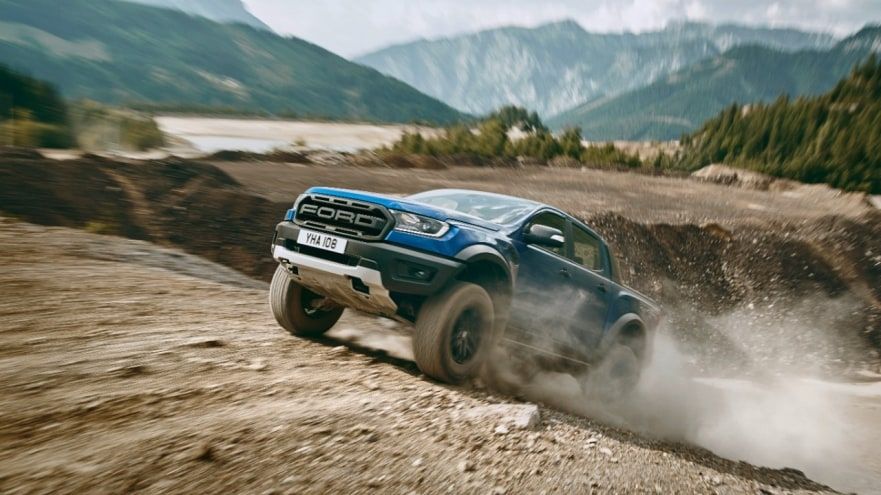 The Ford Ranger Raptor is set to hit South African roads in the first half of 2019, and it is shaping up to be something truly special.

The Raptor’s exterior is unlike anything seen in its segment. Boasting similarly aggressive design cues taken from the F-150 Raptor, the Ranger Raptor sports an imposing stance, with 283mm of ground clearance and 150mm wider front and rear tracks, you immediately know that this is a serious off-road machine. But with the Raptor, everything is functional – from the composite flared fenders, to the air-curtain ducts to the new LED fog lights.

The interior – although similar to the existing Ranger – now gets grippy suede sport seats, while other sporty details distinguishing the Raptor include blue stitching and leather accents, as well as the aggressively-styled instrument cluster. The steering wheel gets a red 12 ‘O clock marker, and perforated leather hand grip sections, paired with lightweight magnesium paddle shifters for crisp gear changes.

Powering the Raptor is a new 2.0-litre Bi-turbo diesel engine that delivers a maximum of 157kw of power and 500nm of torque. This might be down compared to some of its V6-engined rivals, but in the real world, the difference is power will amount to very little as this motor is paired with a 10-Speed automatic transmission. And having 10 gears means a wider ratio-span, resulting in better acceleration and responsiveness.

While Ford has come in for criticism as of late regarding their engine reliability, the Raptor’s powertrain is up to the task of handling the stresses of high performance, as it has been designed from day one for the most powerful and highest stress applications. This includes running a thermal cycle on the engine, heating both turbos to the point of glowing red for 200 hours non-stop. The high grade alloy turbo housing ensures durability up to 860 degree Celcius exhaust temperature, while the turbo bearings and low-pressure turbo are being water cooled to reduce temperature and protect the air induction components.

Riding on massive BF Goodrich All-Terrain 285/70 R17 KO2, these were specially developed to have a sidewall tough enough to navigate all environments with confidence, whilst providing maximum grip in any situation. Braking has always been improved, with the Raptor featuring impressively sized 332 x 32mm ventilated rotors up front, as well as ventilated 332 x 24mm rear rotors. Up front it uses a bigger twin-piston system, while for the first time ever, a Ranger features rear disc brakes.

To better handle the crunching jumps and wild rides of off-road pursuits, the Ranger Raptor's Position Sensitive Damping (PSD) shock absorbers are exclusively manufactured by FOX, designed to provide higher damping forces at full jounce and rebound to enable better off-road capabilities, and lower damping forces in the mid-travel zone for class-leading on-road comfort. The Watt's linkage rear suspension has been specifically crafted to tackle tough terrain at high-speed while remaining in complete control and comfort, offering the best of both worlds.

All this tech would amount to nothing, if the Raptor wasn’t rigid enough to cope with such off-road abuse. And with that, Ford extensively modified the Ranger’s frame to cope high speeds and endurance off-road, by using various grades of high-strength low-alloy (HSLA) steel. It also has a special Baja mode integrated into its Terrain Management System (TMS), which enables ultra-responsive, high-speed off-road performance.

"The standout experience of the Ranger Raptor, hands down, is how far you can push it off-road versus any other available standard production road vehicle, and still provide amazing ride comfort on-road," said Damien Ross, chief program engineer, Ford Ranger Raptor. "Everything about the Ranger Raptor builds on the already outstanding sophisticated feel and functional capability of the Ranger, and then goes further. From a driving dynamics and fun standpoint, it is really an exceptionally special truck."

Ford New Zealand has released this short clip proving that this high-speed desert racer - with its high-tech FOX Racing suspension and Terrain Management System (TMS) - is the new benchmark in high-speed, off-road pickup capability, making it the ultimate performance pickup in its segment.

Ford South Africa has yet to release any pricing, but guesstimates peg the price at around R800 000