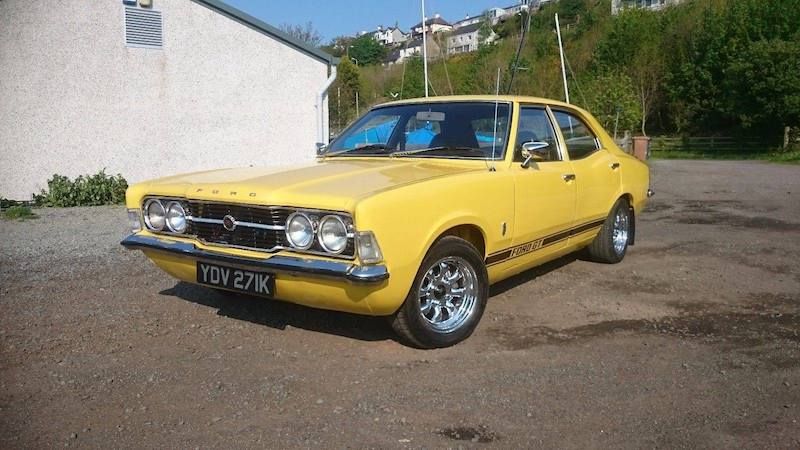 The Cortina Mk3 was ideal for the flamboyant and funky era that was the Seventies. Whilst its predecessor had been an Mk1 makeover, the Mk3 was completely fresh.

The car had a pronounced coke bottle style with neat front and rear ends which were severely squared. A long bonnet added to the impression of litheness. The roofline was lower than the Mk2, and it had a more inclined front windscreen, giving the car a smoother shape. Black stripes ran the length of the car - narrowing as it reached the back and cutting through the wheel arches – no doubt emphasizing the Cortina’s curves.

Additional black panels on the bonnet and rear further distinguished the GT from the rest of the Cortina range. If this wasn’t enough, there was a large GT badge at the back. The black and chrome Rostyle wheels complimenting the chromed bumpers, door handles, and window surrounds – giving off an executive touch. Although the Mk3 looked significantly larger than the boxier Mk2 Cortina, it was actually the same overall length, but 100mm wider.

Under its long bonnet was a rather special big-bore short-stroke 2.0-litre unit – quite special for SA. While other models in the range used the tried and tested cross-flow, bowl in piston combustion chamber motors, the GT used an overhead camshaft motor that was designed and built by Ford of Europe. Carburation was by a single downdraught Weber twin-choke, and the exhaust setup was a semi free-flow system. This resulted in eager and responsive performance, with good bottom end torque – boasting outputs of 72kw and 151nm. Remember, this was 1972!

On the suspension side, Ford dropped the leaf springs, and installed coil springs, which resulted in the elimination of axle tramp under hard acceleration, despite the abundance of wheel spin. Those that drove them, remarked that ride was comfortable, yet firm – after all, this was a sporty variant. To further enhance performance, it was fitted with larger drum brakes at the rear, while the front ran the same disc brakes as the standard Mk3.

While few may regard Ford’s Cortina 2000 GT as being the most special of the Cortina lineage, there is no disputing that it is the best looking, with its glorious coke-bottle looks, reminiscent of the American muscle cars of the time. With its ravishing looks, and strong output, the Mk3 GT was unlike anything that came before it, and was considered expensive when launched at a price of R2741 in 1972. It was the sporty model until the Essex V6-engined “Big Six” arrived in 1973, which was further topped by the XLE in 1974.