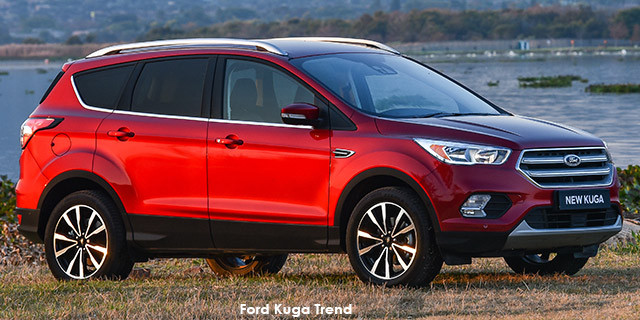 Mention a Ford Kuga to the average South African, and most will respond with a simple question “Aren’t those the ones that catch on fire?” A common misconception - and a pity, which hasn’t done the Kuga’s reputation much good.

A couple of years back, models equipped with the 1.6-litre EcoBoost had the potential to set alight under certain conditions, with numerous examples burning in South Africa.

Although this was over five years ago - and Ford replaced the 1.6-litre powertrain in the local line-up - the Kuga has suffered, unfortunately, losing sales to vehicles like the Tiguan and RAV4.

We say unfortunately as the Kuga is quite the competent family car. Not only is it well-built, practical, and economical (if you buy the diesel version) but rather good fun to drive - for a mid-sized SUV, at least. We got behind the wheel of a 1.5 TDCi Trend, to reacquaint ourselves with the Blue Oval’s offering.

The competition certainly has the Kuga licked when it comes to styling. It can’t match the Tiguan or CX-5 for that effortless, upmarket look they both do so well. Nor does it match the 3008, Peugeot’s unique and avant-garde offering. That’s not to say it’s ugly, far from it - the Kuga is just a bit reserved in a segment with some real lookers.

Inside, we run into the same sort of problem. It’s certainly well-built, but it’s missing the premium touch of the aforementioned rivals - particularly the Mazda with its stellar build-quality and the Peugeot with it’s beautiful detailing. Still, everything feels well-constructed and feels as if it will last a lifetime.

Equipment-wise, you won’t want for anything. The Trend may be the mid-range model, but for just under R500 000 you receive leather seats, alloy wheels, and Sync3 - which offers Android Auto and Apple CarPlay as standard and navigation as an optional extra. On a more practical level, the Kuga also receives a crisp reversing camera, hill assist, and traction control with ESP.

Boot space is commodious and can be made even more capacious by folding the rear bench down. The rear bench offers decent levels of space, the cream interior scheme giving a sensation of spaciousness. The front seats are supremely comfortable, and if we had to nitpick, we’d want more thigh support.

This particular Trend derivative, the 88 kW/270 Nm 1.5-litre turbodiesel, is available only as a self-shifter. If you require your oil-burner to have an auto ‘box, the pricier (but more powerful and better equipped) 2,0 TDCi is up to your street.

Still, the manual gearbox is at least slick-shifting (as it is with most Fords) and is quite a joy to use. Courtesy of the torquey powertrain, town driving is rather effortless. So too is highway driving, where the Kuga shows off its superb fuel economy. Ford claims an ambitious 5.3 litres/100 km and amazingly, we almost matched that. Over our time with the Kuga 1.5 TDCi, we managed to average just 5.6 L/100 km.

The Kuga shows signs of struggle when tackling steep, sudden inclines. It gets bogged down rather easily, requiring generous stirring of the six-speed gearbox to maintain momentum. Like it's Fiesta and Figo siblings, the Kuga seems to have a dynamic streak. It’s still an SUV, remember - so there’s body roll - but the steering is crisp and communicative, while the clutch and gearbox are just so enjoyable to use. There’s plenty of grip, too.

We could bemoan the relative lack of refinement when compared to rivals, but the 1.5 TDCi doesn’t really have any. VW’s cheapest diesel Tiguan is nearly R200 000 dearer, while Mazda and Hyundai offer just one diesel derivative each - and both are far more expensive. It’s not terribly unrefined; the 1.5-litre just creates a bit more noise than the larger powertrains. Still, Ford’s own two-litre turbodiesel matches rivals for rolling refinement.

At R492 300, the Kuga offers exceptional value for money. Not just from a purchasing perspective, either. Yes, it’s a lot of car for the money, packed to the rafters with equipment and offering plenty of safety kit. But when you factor in the fuel economy, six-year/90 000 km service plan, and vast Ford dealership network, it starts to make sense on an entirely new level. It’s a pity that consumers are put off by the rather unfortunate reputation the Kuga still carries, as it really is a compelling family SUV for those that value economy, practicality and common sense.

Buy a new or used Ford Kuga at a great price.
We put you back in control, make a single request and get up to 3 quotes from dealers nationally.
Get Quotes