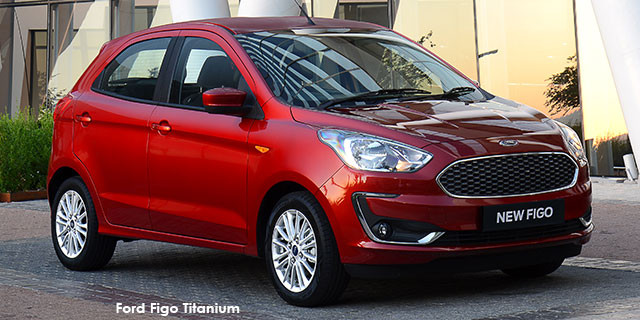 Introduced in 2010, the Ford Figo has enjoyed spectacular success in South Africa. The first-generation, based on the Mk5 Fiesta, was an absolute sales hit locally. Part of this was down to the impressive standard equipment and low ownership costs. The Figo was fun to drive, too, capitalising on the Fiesta’s dynamic chassis.

A second-generation model was released in 2015, with a notably bigger body offering more interior space. We reacquainted ourselves with the Titanium derivative, to see whether the latest model is as competent as its forerunner.

Six years on and the Figo still feels fresh. The engine range is limited to just one option - a 1.5-litre, three-cylinder petrol engine with 91 kW and 150 Nm of torque on offer. The Titanium is the range-topping derivative (if you exclude the SUV-inspired Freestyle and Automatic Trend) and is suitably well-equipped. Ford SYNC3 - which includes Bluetooth, voice control and steering wheel controls - are standard and operated via a 6.5-inch touchscreen. A reverse camera, a host of airbags, and ABS are standard too. A slick-shifting, five-speed manual is the only gearbox choice available.

As a compact hatchback, the boot space is praiseworthy. Ford claims 256 litres of luggage space, more than enough for a quick weekend getaway or weekly trip to the grocery store. Rear legroom is similarly exceptional, with ample headroom (in the front and rear) for passengers. The Figo has a slightly longer wheelbase than rivals like the Polo Vivo and Suzuki Swift, making it feel slightly roomier inside.

The three-cylinder engine revs with ease, providing ample performance. The Figo’s ride quality is surprisingly good, too.  It’s nicely damped, while road noise levels are kept to a minimum. During our time with the Figo, we managed to average 6.3 L/100 km, not far off the claimed economy of just 5.7 L/100 km.

The Figo may not offer an exciting design or overtly modern interior, but it’s certainly sensible. The Titanium does, at least, offer stylish alloy wheels that give it an upmarket look. However, the Figo’s rivals are stronger than ever, with competitors like the Swift and Polo Vivo proving very popular with South African consumers. But in typical Ford tradition, the Figo ticks the important boxes. Not only is it sensibly equipped, but the manufacturer’s reputation for good customer service and an extensive dealer network are rivaled only by Volkswagen and Toyota.  If you’re in the market for a well-equipped compact hatchback, the Figo should certainly be on your shortlist. At R255 800, it offers phenomenal value for money.

Buy a new or used Ford Figo at a great price.
We put you back in control, make a single request and get up to 3 quotes from dealers nationally.
Get Quotes