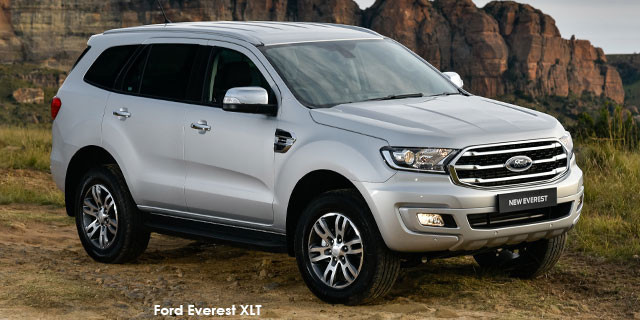 There is no denying the fact that the Toyota Fortuner is a local favourite, however, the Ford Everest has given the Toyota a run for its money in recent years. Is the Everest better value for money? Should it be on your shopping list within this segment? This article expands on these questions and more.

When competition is as tight as it is between the Fortuner and Everest it is the job of the engineers to keep pushing the boundaries for improvements. Ford has made its Everest seven-seater more appealing and upmarket than ever with a range of styling, suspension and feature upgrades, complemented by the introduction of the advanced new 2.0-litre Bi-Turbo and Single Turbo engines that recently debuted on the New Ford Ranger.

The New Everest communicates rugged off-road capability with a sense of refined artistry that takes Ford’s seven-seater SUV to a new level within the segment. The refreshed grille introduces a new level of depth to the design through the layering of three distinctive grille bars that exude exclusivity and luxury whilst presenting a sense of strength and robustness.

The lower bumper has been redesigned to accentuate width, incorporating a connected horizontal beam that has been added to the fascia insert, which gives the Everest an even greater on-road presence. A classy new 20-inch wheel has been introduced on the range-topping Everest Limited, featuring a modern split-spoke design that gives the vehicle a more upmarket and dynamic appearance.

The New Everest provides premium levels of quality, outstanding interior space, and maximum versatility – now with a selection of new, richer materials and design details that emphasize luxury and style throughout. The introduction of the Ebony environment colour changes the entire ambience of the interior cabin. The added depth allows the details and brightwork to stand out and further aligns the interior to the customer’s expectation for a premium SUV, complemented by a greater selection of soft-touch materials.

Ford’s impressive SYNC technology offers exceptional connectivity and multimedia options, along with intuitive voice control and ease of use. SYNC 3 with Navigation is standard on the XLT and Limited models, linked to the integrated eight-inch touch-screen colour display, two USB ports and Bluetooth connectivity as well as smartphone connectivity. Another impressive addition is the Tracks4Africa navigation map which is also included in the package, as well as access to maps for over 20 countries in Africa. Free annual map updates are included for a period of five years, and the text and voice guidance functions are available in a multitude of languages, comprising Afrikaans, Arabic, English, French, German, Italian, Portuguese, Spanish, and isiZulu.

One of the main defining features of the New Everest is the introduction of the all-new 2.0-litre Bi-Turbo and Single Turbo engines that recently debuted on the New Ranger. The maximum power output for the 2.0 Bi-Turbo engine is 157kW, matched to a peak torque figure of 500Nm – improvements of 10kW and 30Nm respectively compared to the existing 3.2-litre TDCi engine. The new engine also offers exceptional refinement, with low levels of noise, vibration, and harshness. It is available in the Everest XLT 4x2 and 4x4 models, as well as the top-spec Everest Limited.

It is also worth noting that the new-generation 2.0-litre Bi-Turbo and 2.0 Single Turbo engines are exclusively available with Ford’s sophisticated all-new 10-speed automatic transmission, which boasts significant improvements in efficiency, fuel economy, and all-round performance.

As with the New Ford Ranger, the New Everest has benefited from numerous suspension improvements that further enhance ride quality and refinement. Most notably, the front-mounted stabiliser bar has been moved to the rear of the front axle, which allows for greater packaging and design freedom, along with an increase in diameter and stiffness to give the Everest improved roll control and handling performance.

Overall suspension compliance has been improved, with three damper tunes being adopted for the New Everest range in place of the single set-up used previously. This ensures that the ride characteristics are better tailored to the engine and drivetrain configurations, resulting in a plusher ride over rough surfaces.

The Ford Everest should be on your list. It offers impressive technology and modern styling with great off-road ability.

Buy a new or used Ford Everest at a great price.
We put you back in control, make a single request and get up to 3 quotes from dealers nationally.
Get Quotes