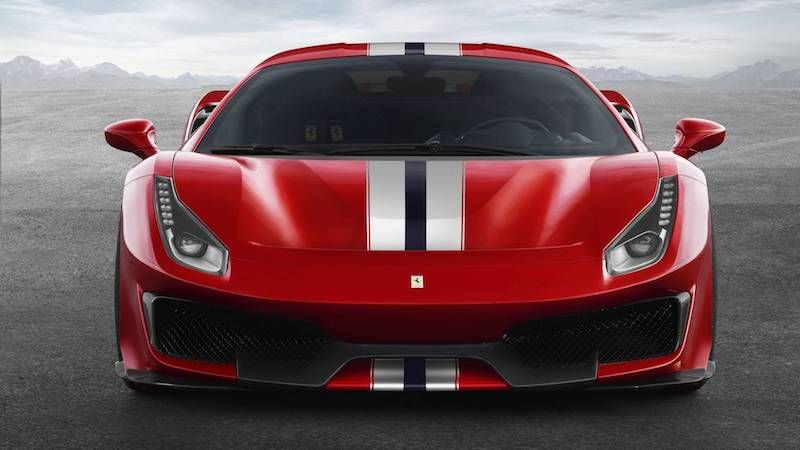 Ferrari has officially unveiled their new 488 Pista at the Geneva Motor Show.

Its name is derived from the Italian word for racetrack, and points to how the car is expected to be used, and follows in the tyre tracks of cars such as the 360 Challenge Stradale, 430 Scuderia and 458 Speciale.

The 488 Pista’s 3.9-litre V8 engine is believed to generate around 530kw and 770nm, making it the most powerful V8 in Ferrari history. The bodywork’s revisions include using the front and rear diffusers from the 488 GTE racing car, there are lighter wheels and carbon-fibre has been used extensively throughout the car to help keep to weight to just under 1.3 tons (dry).

It’s incredibly quick too, running from 0-100kph in just 2.85 seconds, and from 0-200kph in a McLaren 720S beating 7.6 seconds, while its top speed exceeds 340kph. Among the host of electronics offered in the Ferrari 488 Pista, there is an electronic dynamic control with Side-Slip Angle Control system (SSC 6.0) that incorporates E-Diff3, F1-Trac, the magnetorheological suspension (SCM).

Also, the Ferrari 488 Pista comes equipped with Ferrari Dynamic Enhancer, a system that uses Ferrari software to adjust the brake pressure at the calipers. Among the racing solutions adopted is the front F1-inspired S-Duct and the design of the front diffusers which feature a ramp angle that was optimised for the 488 GTE to create strong suction for increased downforce. The rear diffuser incorporates the same double kink as the 488 GTE to increase the air extraction and downforce generation.