Ferrari has made the most of the deserted streets of Monaco, to showcase its latest hybrid supercar, with F1-ace Charles Leclerc at the helm. The supercar in question is the new SF90 Stradale, and it shares its name with the SF90 Formula One car with the name standing for the 90th anniversary of the Scuderia Ferrari racing team and "Stradale" meaning for the road.

The SF90 Stradale is not only the most powerful Ferrari road car ever built, but it is the also marques first series production plug-in hybrid electric vehicle. The supercar even trumps the mighty LaFerrari for output and boasts roughly 1000hp (735kw), and 390kgs of downforce at 250kph, putting the SF90 Stradale at the very top of its segment. It is also the first time since the Ferrari F40 that the flagship Ferrari is powered by a V8.

The twin-turbocharged 90° V8 engine that powers the SF90 Stradale is an evolution of the unit found in the 488 Pista and the F8 Tributo, and produces 574kw and 800nm. The engine capacity has been increased from 3.9-litres to 4.0-litres, whilst the intake and exhaust of the engine have been completely modified. The cylinder heads are also narrower and the all-new central fuel injectors run at a pressure of 350 bar. The turbochargers have also been relocated to be 50mm lower in the chassis than the other mid-engine V8 models in order to maintain a lower center of gravity.

The remaining 162kw is delivered by three electric motors, one at the rear, known as the MGUK (Motor Generator Unit, Kinetic) due to its derivation from the Formula 1 application, located between the engine and the new 8-speed dual-clutch transmission on the rear axle, and two on the front axle. A high-performance Li-ion battery provides power to all three motors and guarantees a 25km range in all-electric eDrive mode, using just the front axle.

The SF90 Stradale is also the first Ferrari supercar to be equipped with 4WD, a step necessary to allow the incredible power unleashed by the hybrid powertrain to be fully exploited, ensuring the car has become the new benchmark for standing starts: 0-100kph in 2.5 sec and 0-200kph in just 6.7 seconds.

The Ferrari SF90 Stradale is expected to arrive in South Africa towards the end of 2020, in limited numbers, carrying an asking price of R10.6 million. 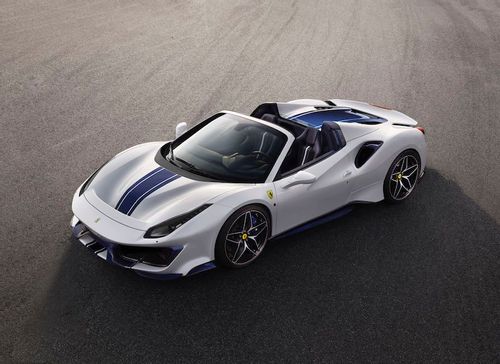