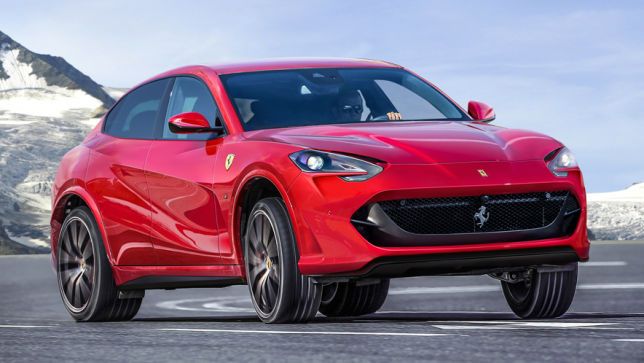 Purosangue. Ferrari have confirmed that that would be the name of their upcoming "SUV". And while "PURR - oh - SAAHN - gway" (the way its pronounced) doesn't quite roll off the tongue as easily as Lamborghini Urus or Porsche Cayenne, Ferrari has assured buyers - and Ferraristas - that the Ferrari Purosangue will be every bit a Ferrari, after all, its name translates directly to 'thoroughbred'.

The Purosangue, which is expected to hit showrooms in only 2022, will apparently be available with either a regular combustion engine (likely V8 and V12), or a hybridized powerplant. And much like a true sports car, it will ride on Ferrari’s new Front Mid-Engine Architecture and feature a front-mid mounted engine layout, in other words, the motor will be mounted behind the front axle. The transmission – a dual clutch unit – will be mounted at the rear. Also set to the located at the rear will be a hybrid system – available on certain models – that will transfer a power electric boost to the rear wheels.

Despite many referring to it as an SUV, Ferrari has shot down the term, with its CEO, Louis Camilleri referring to it as a “a four-door utility vehicle” or a crossover. In fact, the all-wheel drive Purosangue (seen in this render) will feature a coupe-inspired shape and will not be as tall as the Lamborghini Urus, suggesting it will be very un-SUV-like. Either way, it is said that it will comfortably accommodate four passengers, and be the first ever five-door Ferrari in its 71 year history.

Ferrari CEO, Louis Camilleri, said: “As a die-hard Ferrarista, I was a tad skeptical when the concept was first voiced at the board. Having now seen the wonderful design concept and the extraordinary features, and knowing the resources we have dedicated to bringing this vehicle to life, I am a hugely enthusiastic supporter.”

The Purosangue was originally earmarked for a release in 2020, however, this has been pushed back to 2022, as the Italian sports car maker wants to make sure they get it 100 percent right. It forms part of a massive new model assault – 15 models – that will be unleashed by the Maranello-based company over the next 5 years.