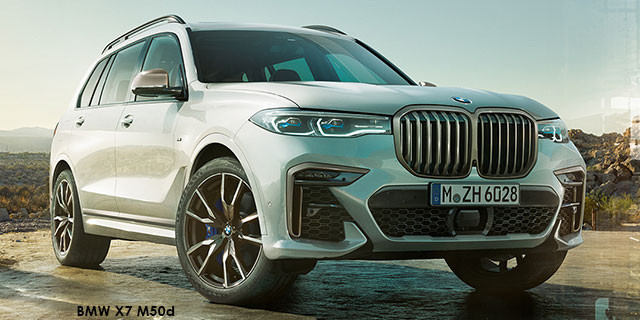 If you’re in the market for an ultra-luxurious SUV, you certainly aren’t limited when it comes to choice. In fact, some manufacturer’s (like Mercedes-Benz) offer up to three different options. BMW - who many credit for creating the first true SUV, the X5 - lacked a full-size model that could duel it out with the likes of the Mercedes-Benz GLS and Range Rover.

Revealed over two years ago, the X7 became the butt of many jokes. The large kidney grille certainly shocked many of the BMW faithful, who hated the way it looked on the imposing leviathan. We must admit, in pictures, the design is rather polarising. However, it suits the X7 quite well when viewed in the metal.

Measuring five metres long and two metres wide, the X7 is vast. You certainly won’t miss it in your rear view mirror, as it bears down on you at high speed. And make no mistake, it will have no problems doing just that.

The model we tested, the X7 M50d, is powered a quad-turbo (that’s four turbochargers), three-litre, six-cylinder diesel. Quite simply, it remains one of the best oil-burners currently produced. It produces an impressive 294 kW of power (more than BMW’s petrol V8’s were producing a decade or two ago) and a mountainous 760 Nm of torque.

We’ll get to the engine in a moment, though. Let’s talk about the looks. Certainly, it’s got presence. The grille? Well, you’ll either love it or hate it. We fell into the former team though - the radiator grille just works. Other than that, it looks like a beefed-up X5. That’s no bad thing - the X5 is handsome and certainly looks the part.

Being an M Performance model, it gains a few sportier details. More athletic bumpers, side skirts, and M Performance alloys give it a more aggressive look.

Inside, the cabin is nothing short of sumptuous. Trimmed in the optional Merino leather, it feels rich and sophisticated. The upholstery itself is supple and covers the very comfortable (and infinitely adjustable) seats. It shares the basic dashboard architecture of the X5, which is a bit of a letdown, considering the fact that this is supposed to be the “7 Series of SUV’s”. Thankfully, everything else makes up for it.

Luxuries abound, front and rear. Naturally, the front seats are electrically adjustable. Massaging and heating are available at extra cost, of course. Interestingly, seven seats are standard - although, for R10 600, you can have the option of a more luxurious six-seater configuration.

Even the third-row offers up reasonable amounts of space. It may not be as capacious as the second row, but it can certainly accommodate taller passengers for short periods of time. Interior quality, much like all BMWs, is of the best quality. Everything feels expensive and soft to the touch. The buttons are beautifully damped and there are lovely details to be found everywhere - the Crafted Clarity glass gear lever, starter button, and iDrive controller add some glitz to the cabin.

Being an M Performance model, the suspension has some element of sports bias. Teamed with the massive (optional) 22-inch alloys, you would think ride comfort has been sacrificed. Certainly not. In fact, the X7 is pillowy smooth. It smoothes out every road scar and simply dismisses potholes and bumps. Those not used to this fine ride may prefer to drive the car in its sport setting, which firms everything up a bit. For such a tall-riding SUV, it handles rather well. Certainly, the X5 and Range Rover Sport will run circles around it, but for a 2.5 ton 6/7 seater, it’s phenomenal.

Speaking of phenomenal, there’s that fabulous three-litre, quad turbodiesel motor. Drive it normally, and it will silently waft about, with no indication that a diesel is under the long bonnet. It sounds quite good, in fact - nearly sporty. But prod the throttle and it shoves all that power and torque through the slick eight-speed ZF automatic gearbox.

Staggeringly, the M50d can hit 100 km/h in just 5.4 seconds before hitting the 250 km/h limiter. It is immensely quick for a car of this type, and is even more impressive when overtaking - it simply just takes off and goes.

At over R2.1 million, it’s tough to justify a car like the X7 M50d. If you want a people carrier, there are equally capable machines out there for far less money. If you want a BMW SUV, an X5 is just as good at a fraction of the price. The engine, as superb as it is, can be seen as excessive. However, driving the X7 dispels all these valid questions and replaces it with sheer desire. It’s a desirable vehicle that cossets you in absolute luxury and pampers you - even on a quick trip to the shops. That being said, we think there is better value to be had in the 30d derivative. At R1 825 000, it’s over R300 000 cheaper - not only will the fuel bills be lower, but you can use that money to kit your X7 out with some options. BMW’s first full-size SUV is a triumph, and a true Range Rover competitor.

Buy a new or used BMW X7 at a great price.
We put you back in control, make a single request and get up to 3 quotes from dealers nationally.
Coming soon