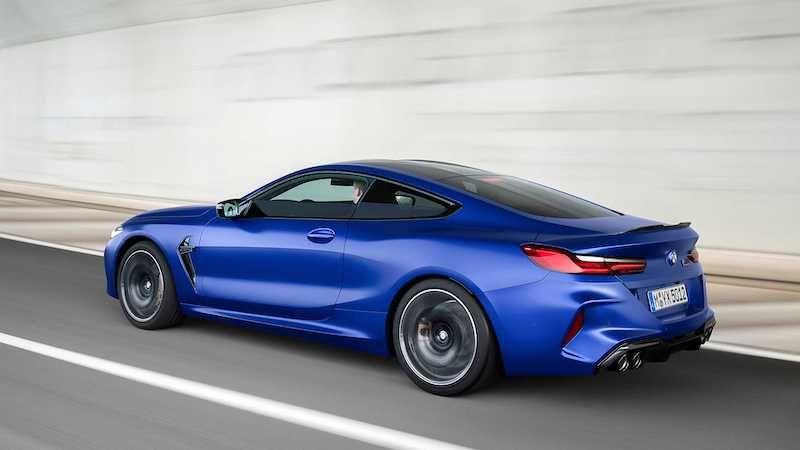 After an extremely lengthy and torturous teaser campaign, BMW has finally taken the drapes off their flagship M8 Coupe and Convertible variants. But that’s not all, because like the M5, the M8 is available in Competition spec.

The launch of the new M8 is unique in that the race car made its appearance almost two years before the production street versions will be available in showrooms. In those past two years of testing and racing in the IMSA WeatherTech Sports Car Championship, the BMW M8 GTE collected three victories, including the prestigious 24 Hours of Daytona, four additional podium finishes and three pole positions. A very solid foundation for the pinnacle model in BMW M’s portfolio.

Despite rumours prior to its launch, the M8 features the same motor and resultantly the same power output as the M5 sedan. That means it has a twin-turbocharged 4.4-litre V8 that produces 441kw and 750nm. And like the M5, power is sent to all corners through an eight-speed M Steptronic transmission with Drivelogic, whilst a rear-biased M xDrive all-wheel-drive system allows the driver to toggle between its default 4WD setting, 4WD Sport mode, and a 2WD mode.

The engine features two-turbochargers, cross-bank exhaust manifolds, direct injection and upgraded cooling and oil supply. The turbochargers are positioned within the V of the engine block to help improve thermal efficiency and response. The cross-bank exhaust manifolds improve turbocharger and throttle response by reducing the distance the exhaust gases need to flow to reach the turbochargers. The direct fuel injection operates at a very high 350 bar ensuring ultra-fine fuel atomization for improved power and efficiency. Water-to-air intercooling helps reduce the temperature of the incoming air charge for improved power.

The advanced cooling system is composed of two separate water circuits, one for the intercoolers and one for the engine and turbochargers. An electric cooling pump ensures that the turbochargers receive sufficient coolant flow even after the engine has been turned off. An additional engine oil cooler and transmission oil cooler ensure the new BMW M8 is capable of standing up to the higher thermal demands of track driving. The oil supply system has been upgraded with a secondary front chamber in the oil pan which is accessed by a map-controlled oil suction pump to insure effective oil supply during extreme lateral and longitudinal forces such as cornering and acceleration.

The M8 Competition meanwhile sees a slight bump in power compared to the M8. Power from its S63 M TwinPower Turbo V8 now stands at 460kw, but it also differs in that the engine mounts on these models are more rigid compared to the M8 for improved power transmission throughout the driveline and for more immediate turn-in during cornering. The Competition models are also equipped with an M Sport exhaust which enhances the sound even further beyond the selectable sound of the M8. An M Sound Control button in the center console allows the driver to select the exhaust note which suits their desire.

The power and torque of the most powerful production engines ever made by BMW M allow the BMW M8 Coupe to accelerate from 0 to 96kph in just 3.1 seconds and the M8 Competition Coupe to accomplish the sprint in 3.0 seconds. The M8 Convertible reaches 96kph from a standstill in 3.2 seconds and the M8 Competition Convertible equals the Coupe’s time of 3.1 seconds. All four M8 models have an electronically limited top speed of 250kph which can be increased to 305kph with the optional M Driver’s Package.

The new BMW M8 models are also equipped as standard with M-specific Adaptive suspension including electronically controlled dampers and electromechanical M Servotronic steering. The DSC system hooks up with the M xDrive all-wheel-drive system and the Active M Differential and also offers M Dynamic mode. This mode allows a greater degree of wheel slip and combines with the M xDrive system’s rear-biased setup to deliver an exceptionally sporty drive complete with controlled drifts through corners.

As an alternative to the M compound brakes specified as standard, the new BMW M8 can also be ordered with optional M carbon-ceramic brakes. Both variants are fitted in conjunction with an M-specific version of an integrated braking system. Thanks to this cutting-edge technology, the brake activation, brake booster and braking control functions are brought together within a compact module. The brake pressure required is triggered by an electric actuator, which means it can be generated more dynamically, pedal feel is optimised and the interventions from the stability control system are significantly faster and more precise.

The new M8 will make its public debut at BMW’s #NextGen event in Munich at the end of June, with an international market launch beginning in September. Although, its likely to only arrive in South Africa towards the end of 2019 or in early 2020.