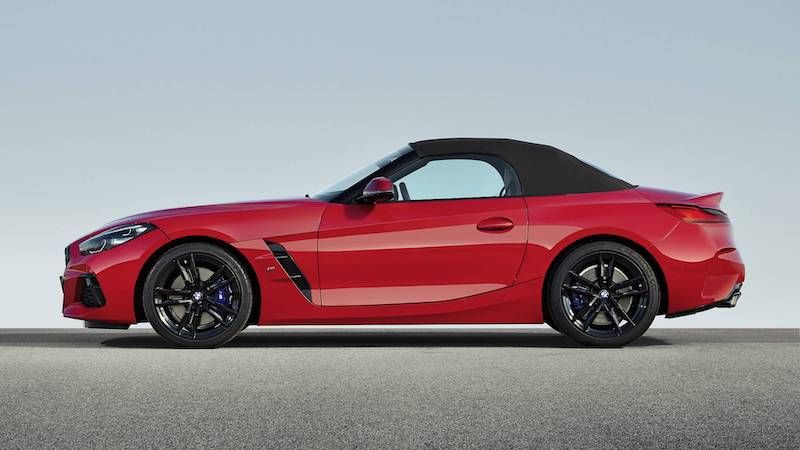 The first half of 2019 is shaping up to be a busy one for BMW, with the German luxury automaker set to launch of slew of new models including the X2 M35i, the M850i Coupe and Cabriolet, and the new Z4.

The new G29 Z4 is based on the Z4 Concept, originally unveiled at the 2017 Pebble Beach Concours d’Elegance. For the first time ever, the Z4 was co-developed with another automaker. And thanks to a partnership with Toyota, the new Z4 and the upcoming A90 Toyota Supra share a fair amount of DNA.

Riding on BMW’s lightweight CLAR platform, the new Z4 boasts a 50:50 weight distribution, as well as weight savings of up to 50kg compared to its predecessor. It uses a soft-top convertible roof, instead of a retractable hardtop, and can be raised or lowered in 10 seconds at speeds of up to 50kph. Its boot is also 50% larger than the model it replaces, and has a capacity of 281 litres.

The two-seater Z4 is offered with a 10.25-inch display running BMW’s latest iDrive 7.0 operating system. It is available with BMW ConnectedDrive services which allow for over-the-air updates for the navigation maps and operating system. Much like the new 7 Series, its digital key feature allows the car to be unlocked and started with a smartphone, and access can be shared with other people. It is also available with a customisable, digital instrument cluster (called BMW Live Cockpit Professional).

Only two models will be offered locally, an sDrive 2.0i and the range-topping M40i. The sDrive 2.0i uses a B48 turbocharged 2.0-litre motor to produce 145kw and 320nm, whereas the M40i uses the highly rated B58 turbocharged 3.0-litre inline-six to produce 250kw and 500nm, available from 1,600 to 4,500rpm. In the M40i, standout features of the B58 include a water-cooled exhaust manifold integrated into the cylinder head, sharper turbocharger response and superior acceleration, and direct injection technology which now works at increased maximum pressure of 350 bar. It’s also widely expected that the Supra will use the same motor, and boast the same outputs.

Interestingly, our local spec model is actually down on power compared to the US-spec model which produces 285kw from the same motor. Paired with an 8-speed Steptronic Sport automatic, the M40i will blitz from 0-100kph in just 4.6 seconds. And being an M Performance car, it will come standard with adaptive dampers, M Sport brakes, and an electronically controlled rear differential. The transmission also features a Launch Control function for accelerating hard from a standing start with optimised traction. The transmission fitted in the M40i has been configured with M-specific shift characteristics very much in tune with the inline-six engine's power delivery.

BMW South Africa plans to launch the new Z4 locally during the first quarter of 2019.