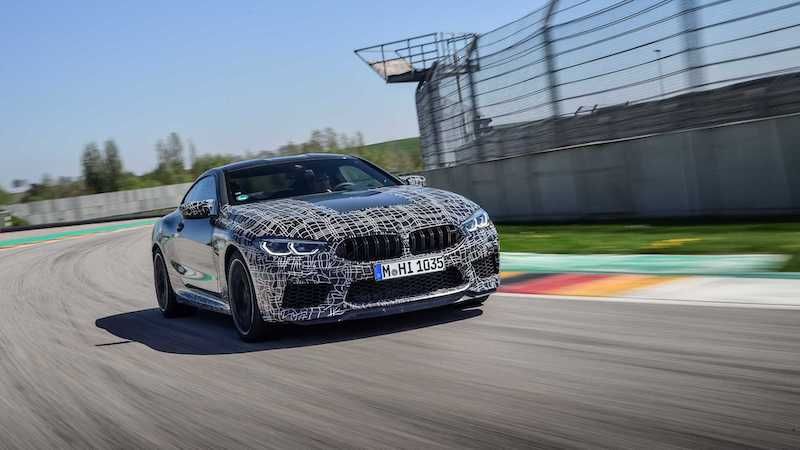 According to a man with a stopwatch, BMW’s upcoming sports coupe has lapped the ‘Ring in 7:30

We’ve known for some time now that BMW M was working very hard on their M8 and M8 Competition siblings, and now, with an unveil imminent, the German luxury automaker has released a handful of camouflage pictures of the M8 running hard around a race track. But that’s not all, as they revealed some very interesting information that suggests that the M8 will indeed be something truly special when it debuts shortly.

For starters, the M8 will be powered by the very same twin-turbocharged 4.4-litre V8 that powers the M5. Except BMW M have promised that the M8 will have more than 600 horsepower. This leads us to believe that while the M5 Competition makes 460kw, the M8 will make around the same, with the M8 Competition rumoured to be producing a staggering 485kw. Like the M5, it will also feature a variable M-tuned xDrive all-wheel drive system with a drift mode.

Aside from more power, the M8 Competition is expected to feature a lower ride height, firmer suspension calibration with revised spring rates and dampers, stiffer motor mounts, and a sports exhaust system, over the regular M8. BMW is also claiming they are taking adjustability to a whole new level with the M8 and M8 Competition, as they will offer adjustable steering, suspension, transmission, engine, differential, and all-wheel drive settings.

The M-specific version of a new braking technology paves the way for the configuration of braking characteristics, a feature available for the first time in the new BMW M8. The new system brings together the brake activation, brake booster and braking control functions within a compact module. The integrated braking system reduces weight by around two kilograms and employs a vacuum-free brake booster to enhance the car’s overall efficiency. The brake pressure required is triggered by an electric actuator, which allows it to be generated more dynamically and also ensures significantly faster and more precise interventions from the driving stability control system.

Another interesting titbit, is the fact that one wily spotter, timed a BMW tested M8 Coupe lapping the Nurburgring on his stopwatch. The lap time? 7:29.5. Granted, this isn’t the most accurate way to time a lap these days, but it would be accurate to within a few seconds. And considering this was the Coupe, it’s very likely the Gran Coupe version of the M8 will be slightly slower – meaning it is possibly slower than its Mercedes-AMG GT 63 S rival around the Green Hell.

Earlier this week, a picture (attached) of the M8 Competition surfaced online, apparently taken at a recent exclusive presentation of the vehicle, giving us an opportunity to get a glimpse of what the sports car will look like in an undisguised form. Let’s not forget, the M8 will be available in three body styles – Coupe, Gran Coupe and a Convertible. BMW have yet to confirm when the M8 and M8 Competition will be unveiled, but it is likely to happen in the coming weeks, with the high-powered sports car likely to arrive in South Africa towards the end of 2019 or in early 2020.