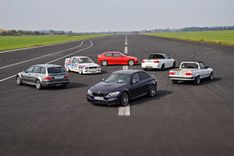 What do you get when you put four of the greatest BMW M cars on one airfield runway? Motoring nirvana that�s what.

That�s precisely what the UK�s CarWow did by gathering four generations of M3�s for an interesting drag test. While this test might appear to be utterly pointless to a few, to petrolheads, just the thought of seeing four of the most special M3s ever made � together at one time � will have us rubbing our hands with glee. Unfortunately, the E36 � the first M3 to get a 6-cylinder - is missing from this line-up.

The oldest car in the line-up is the very first M3 � the iconic E30. This particular car is the rare Roberto Ravaglia version � and is one of only 25 in the UK. The car uses a 2.3-litre 4-cylinder S14 motor and produces 162kw and 230nm � even more power than the large capacity 6-cylinder South African-built 333i and the 325iS.

While they somehow skipped the E36, next up was the legendary E46 M3 CSL. With only 500 built worldwide, the CSL represented what many believed to be the best handling M3 ever made. It featured a 3.2-litre inline-6 S54 and makes 265kw and 370nm, and created and most spine-tinging sound. Its 7:50 Nurburgring lap time is proof of its pedigree.

Next up was one of the most track-focused road cars ever made � the lightweight M3 GTS. Whereas the E92 M3 used a high-revving 4.0-litre V8, the GTS had to motor stroked to 4.4-litres, with output leaping to 331kw and 440nm, whilst dropping over 115kgs. This all equated to a Nurburgring lap time of 7:48.

And finally, the most powerful M3 ever created � the F80 M3 CS. The F80 was the first turbocharged M3, and drew its power from a 3.0-litre twin-turbocharged inline-6 S55 to produce 338kw and an incredible 600nm in the CS. Paired with a fast shifting 7-speed M-DCT, it went onto become one of the quickest sedans to ever lap the Nurburgring with a time of 7:38.

And without further ado, prepare to have your day made�