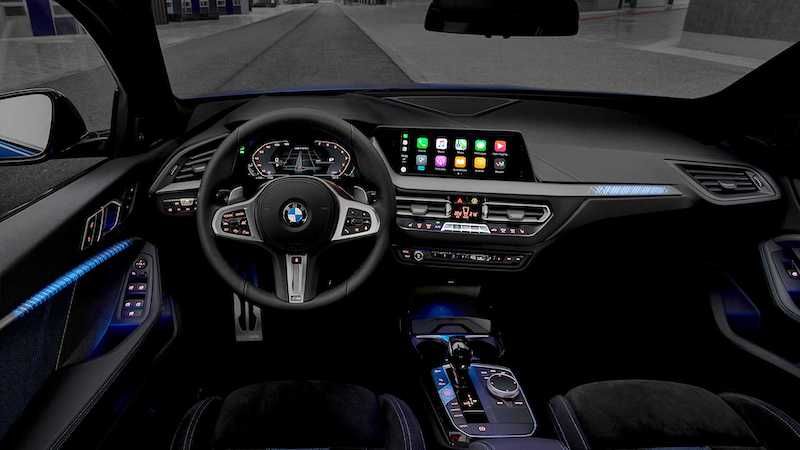 After being fooled by a handful of renders, we finally meet the new 1 Series

BMW has finally unveiled their all-new 1 Series hatchback, much to the chagrin of fans around the world. Why are people upset you ask? It is because BMW has decided to ditch its tried-and-tested rear-wheel drive setup in favour of a front-wheel drive layout.

As you can imagine, BMW loyalists are livid, but thankfully BMW has found a very clever way to work around this. Enter the new flagship model of the 1 Series range – the M Performance fettled M135i. Whereas the previous M135i and M140i models were rear-wheel drive, BMW has now fitted a multi-plate-clutch xDrive all-wheel drive system to the range-topper to give it prodigious amounts of grip in all circumstances, whilst still able to retain some of the enthusiastic and sporty handling that comes with a rear-driven chassis.

But that’s not all, because BMW has also binned its award-winning force-fed inline-six that featured in the second-generation 1 Series. As a result of downsizing, the spicy 1er will go up against the Audi S3, Volkswagen Golf R, and the Mercedes-AMG A35; and will feature a retuned version of BMW’s turbocharged 2.0-litre four-cylinder petrol engine, developing 225kw between 5,000 and 6,250rpm, and 450nm between 1,750 and 4,500rpm. Interestingly, the B48 in the new M135i produces far less power and torque (250kw and 500nm) that the B58 in the older M140i.

Incidentally, this is the same motor that does duty in the M35i X2 and is paired with an 8-speed Steptronic gearbox, and will also feature launch control. So, expect 0-100kph to take 4.8 seconds. But from November, the M135i will be optionally offered with an M Performance package that’ll shave off a tenth of a second from the sprint time. As expected, top speed will be electronically limited to 250kph. Insiders suggest the four-wheel drive system will add roughly 55kg to the weight of equivalent front-wheel-drive models, so there really isn't a significant weight penalty over the existing F20's rear-wheel-drive-based structure.

Despite having a striking resemblance to the X2, the new 1 Series carries an enlarged front grille with the two kidneys now meeting in the middle instead of being separated like they were on the previous generations. The M135i features a unique grille, much like that seen on the new M340i. It still retains the large shapely headlights we have come to love with the 1 Series, but now the rear features slim-line LED taillights, and a diffuser housing twin 100mm diameter chrome pipes.

The switch to a FWD platform pays dividends in terms of the available room inside the cabin where rear passengers now enjoy an extra 19mm of headroom, 33mm of additional legroom, and a further 13mm of elbowroom. It’s also the most advanced 1 Series, featuring the latest BMW Operating System 7.0 paired with a 10.25-inch infotainment screen. The car also features a 10.25-inch digital gauge cluster, while a 9.2-inch BMW Head-Up Display is an optional extra.

BMW has previously spoken of its switch to the new FAAR platform that will provide the new F40 with a lower kerb weight and improved packaging, together with simplified production processes and greater profitability than its rear-wheel-drive predecessor. The new FAAR platform is actually an evolution of the UKL platform that is already in use, but with added modularity and the flexibility to support full-electric drivetrain and battery combinations.

And whereas automakers are making their cars bigger and resultantly more spacious, BMW has gone a slightly different direction with the new 1er. At 4,319mm long, it is actually 5mm shorter than the model it replaces. However, width has increased by 34mm and now measures 1,799mm and height has gone up by 13mm to 1,434 mm. As far as the wheelbase is concerned, it too has been shortened by 20mm to 2,670mm. Additionally, the new car offers 380 litres of luggage space, 20 litres more than the outgoing model, while rear luggage space increases to 1,200 litres with the rear bench seat folded down.

BMW will host the public debut of the new 1 Series in Munich from June 25 through 27 as part of the #NextGen event during which the 8 Series Gran Coupe will also be showcased, and it will be revealed on the international stage at September’s Frankfurt Motor Show. While the new 1 Series will officially go on sale in Europe in September, BMW South Africa has yet to confirm when and what derivatives we will be getting. That said, expect final specifications and pricing for local units to be announced at a later stage.