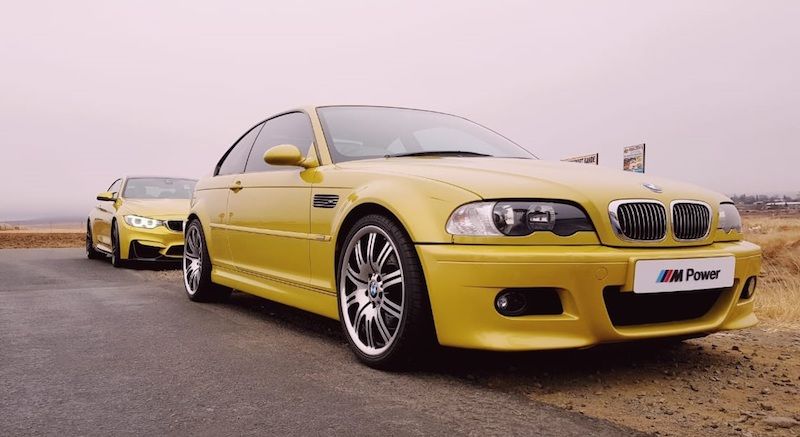 When you think of an M car these days, odds are forced induction and artificial exhaust notes come to mind. But fortunately, as the world progresses, it opens our eyes to what the real purist M3s are.

Cars that had a high-revving motor, a brilliant manual transmission and near telepathic handling, it’s easy to see how in recent times BMW M has prioritized power and luxury over outright dynamics. Many would even argue that the E46 M3 was the best M car of them all – combining all the finest elements of an M car in a fun, beautiful package.

Whereas the E36 M3 was dull and boring looking, the E46 M3 looked like a proper performance car. The rear end was extremely broad compared to the E36, with this done by pushing out the wheel tracks out by 40mm, and packaging the extra width under bulging wheel arches. It also sat 15mm lower giving it a well planted stance.

Adding to the muscular looks were chunky side sills, four chromed tailpipes out back and fender vents that were an ode to the 70s 3.0 CSL “Batmobile”. Up front there was a deep gaping airdam, which was sculpted to provide maximum airflow into the engine bay. For the first time, the M3 even featured a power dome, however this subtle elevation was necessitated by the engine’s added height, and the need for cooling space around the cylinder head.

At the time of developing the E46 M3, BMW M actually contemplated dropping in the E39 M5’s 298kw V8 because not only would that have slashed development costs, but it would have offered far more power than its rivals. In the end, they decided to stick with tradition and retain an inline-6 – the quintessential expression of BMW’s performance focus – a trait still continues to this day.

Interestingly, BMW said that only five components used in the E46 M3’s motor could be traced back to the E36 M3’s 3.2-litre. And despite dabbling in the development of magnesium engine blocks, BMW retained their old cast iron unit in the interests of durability. A 0.6mm increase in bore raised capacity to 3245cc, with maximum power of 252kw achieving at a dizzy 7,900rpm, whilst peak torque of 365nm was developed at 4,900rpm. The redline set at 8,000rpm was achieved by using an improved version of BMW’s in-house developed MSS54 management system, that was capable of processing more than 30 million piece of information per second.

The E46’s inline-6 S54 emitted a beautiful, throaty wail all the way to its 8,000rpm redline, and make no bones about it, the S54 begged to be wound up, and engaged the driver in ways that very few modern motors could. The F80’s S55 might be king on paper, but for the intangibles, the E46 M3’s engine was unbeatable. Mated to the motor was a stiffened version of the E36 M3’s Getrag 6-speed manual transmission, which featured a new variable differential developed by GKN. At the sight of traction being lost, this differential engaged an electronically controlled clutch that varied the lock on the rear wheels from zero to almost 100%.

Despite weighing some 1.6 tons, the E46 M3 was actually the fastest accelerating M car of all time - when it launched - besting the M5 V8’s 0-100kph time of 5.6 seconds, with a 5.48 second effort when tested in SA. The E46 M3 performed best on 98 octane though, something we were always starved of in South Africa.

The E46 M3 ran on a heavily reworked E46 3 Series chassis that was honed in an elaborate 2-year test programme that saw it tested everywhere from the Nurburgring, to Death Valley, to the Alps. Its strengthened suspension was a combination of MacPherson struts up front and a trapezoid Z-beam multi-link arrangement at the back. There was an extensive use of aluminium to reduce unsprung mass, in a bid to provide sharper responses at the wheel. The brakes that were also bigger than before, measured 325mm up front and 328mm at the rear, and were paired with aluminium calipers. Even the drive was pure simplicity. There wasn’t dozens of different drive modes that diluted the experience like today’s M models - the E46 had just a single adjustment – “Sport”.

The muscular E46 certainly moved the game along when BMW SA launched it in SA in 2001, with a price tag of R365 000 – which was actually cheaper than a Honda S2000. Nowadays, M cars are crazy high-tech and incredibly fast – but cars like the E46 (and other old M cars) have traits like simplicity, natural aspiration and compact dimensions – traits that captivated and enthralled enthusiasts around the world and made BMW M the brand it is today. When you drive an older M car, you realize the cliche is very much true: They don't make them like they used to. And if you’re looking for an investment that is bound to repeatedly put a smile on your face, the E46 M3 is just the ticket.