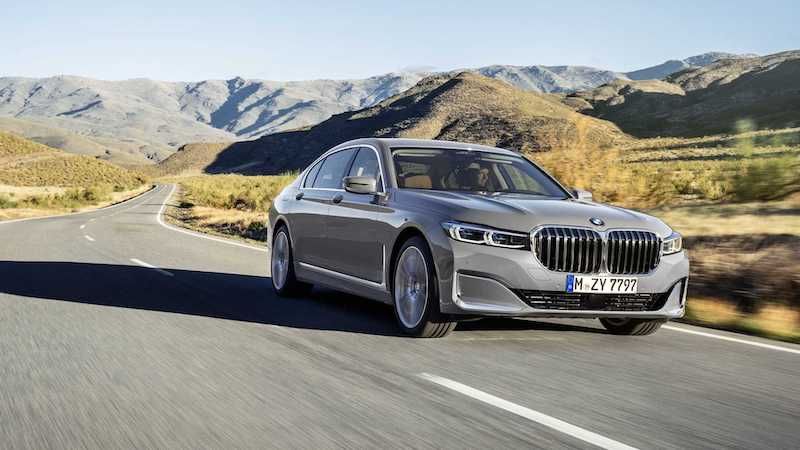 The Bavarian brand has given their 7er a significant refresh, and gifted it some rather large kidneys

Let’s not beat around the bush. The first thing anyone will notice about the refreshed – dubbed Life Cycle Impulse in BMW-speak – are its gargantuan kidney grilles. And if we’re really breaking it down, you need to know that these new one-piece kidneys, are forty percent larger than before.

The reality is – love it or hate it – these gigantic kidneys are here to say. First seen on the X7 SUV, these oversized kidneys actually draw inspiration from 2014’s Vision Future Luxury Concept, and will become a staple of BMW's brand identification going forward.

Speaking of the kidneys, these Active Kidney Grilles feature adjustable vanes which only open when the need for cooling air is increased. But this substantial update isn’t just about its new kidney grille. BMW has updated almost every area of the body, including the front bumper, bonnet, headlights, front fenders, rear bumper trim and rear lights, all of which accentuate the elegance of the 7 Series. Such are the extent of the front end revisions, that the updated 7 now stands 50mm taller at its foremost point.

On the technology front, it also gets BMW’s latest version of the iDrive system with updated graphics and menus – 7.0 to be exact - and a new digital instrument cluster, as seen on the new 8 Series. There’s also BMW’s new voice assistant for the infotainment system, optional laser headlights and more sound deadening than ever before. There’s also some new interior trims and colour options too.

Whereas the rest of the world will get a choice between the G11 short-wheelbase and G12 long-wheelbase variants, South Africans only have a single option – the spacious long-wheelbase variant which boasts an extra 140mm of space over the shorter chassis. In fact, despite the 7 Series LCI having the same overall height and width as the model it replaces, it is 22mm longer at 5 260mm long.

While the global line-up includes a variant of engine options, the South African line-up will be smaller and more focused. The rear-wheel driven 730Ld will be the sole diesel in the local line-up and will produce 195kw from its 3.0-litre inline-six. The new 745Le xDrive is a plug-in hybrid model and utilizes a specially adapted six-cylinder in-line engine from the current BMW EfficientDynamics family of power units – whose maximum output of 208kw is delivered with characteristic smoothness and free-revving eagerness – an electric motor with a rated output of 82kw and a rated torque of 263nm, and a new lithium-ion battery with the latest battery cell technology and increased capacity. Together, they can unleash a total of 290kw and 600nm in its sportiest setting.

In terms of petrol engine derivatives, the 750Li xDrive gets the updated 4.4-litre twin-turbo V8 that is used in the new 8 Series, and boasts some impressive gains. Power and torque have increased substantially from 330kw and 650nm in its predecessor to 390kw and 750nm. Paired with a brand new eight-speed Sport Steptronic transmission which all models in the range will use, the all-wheel drive 750Li can run from 0-100kph in just 4.0 seconds. The flagship M760Li xDrive remains, as does its monstrous 6.6-litre twin-turbo V12, which has now been fitted with the Otto particulate filter to cut down on harmful emissions. Output still stands at 448kw, while torque leaps from 800nm to 850nm, equating to a 0-100kph sprint of just 3.7 seconds.

Production of the G11/G12 LCI is slated to commence in March, with BMW South Africa launching a handful of derivatives, including the 730Ld, 745Le xDrive, 750Li xDrive, and the flagship M760Li xDrive, in the second quarter of 2019.